Edit
watch 01:40
The Sandman Will Keep You Awake - The Loop
Do you like this video?
Play Sound

Alden's Tower is a stage in PlayStation All-Stars Battle Royale based on inFAMOUS and Sly Cooper.

There is a trophy avaliable if Cole uses Ionic Vortex or if Evil Cole uses The Beast Awakens! on the stage.

The stage starts at the bottom of the tower. As the fight progresses, fighters are forced to climb upwards as the stage scrolls up. Those who fall or are left behind will be respawned with less AP. At the middle of the tower, Carmelita Fox will fly by in a police helicopter and taunt the fighters. Two large neon signs will also act as a stage hazard, electrocuting anybody slammed against them. After some time has passed, players will reach the top of the tower, where the background changes into a Sly Cooper fashion. The Ray Sphere appears on the top platform at the peak of the tower, which drops large quantities of AP. Carmelita will also show up, circling the tower in her helicopter and shooting at fighters from the foreground.

The first phase of the level features a remix of "Meet the Reapers" by Amon Tobin & Jim Dooley from InFAMOUS.

The second phase features a remix of "Whoa Camel, Whoa" by Peter McConnell and Michael Bricker from Sly Cooper: Thieves In Time. 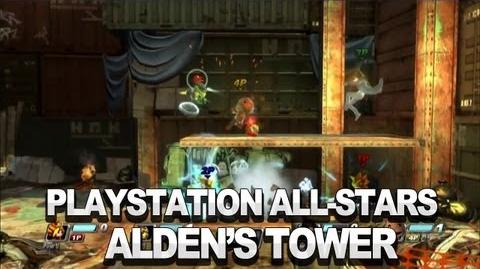