None ("talks" through Andrew Ryan)

"The Parasites will be purged."

Big Daddy is a character from the BioShock series and is a playable character in PlayStation All-Stars Battle Royale. His in-game rival is Sackboy.

Genetically programmed to search for the ADAM essential to the social fabric (before the society in the city collapsed) of their undersea city, Little Sisters roam through the portals and tunnels of Rapture. Because the substance they extract from the recently fallen is so precious(due to its ability to genetically alter one’s genes), the girls are accompanied at all times by their rather intimidating, diving suit-clad protectors, the Big Daddies. With the Bouncer variant (and Alpha Series) armed with a deadly drill, possessing incredible strength, and capable of quick bursts of speed, the Big Daddies guard their charges seriously, making all who attempt to harm a Little Sister wish they hadn't.

THE LEGACY OF THE BIG DADDY:

The story begins with a Bouncer (a variant of Big Daddy) and his Little Sister wandering the streets of the underwater city, Rapture, looking for ADAM. The Little Sister becomes impatient with the Bouncer for being too slow. As he catches up, she strangely finds a passage out of Rapture and continues on searching.

Reason: While out searching for ADAM, the Bouncer and the Little Sister come across Sackboy, whom Little Sister admires for his cute and soft appearance. As Sackboy and Little Sister play jump-rope, Little Sister proclaims that she and Sackboy will never be separated by the likes of the Bouncer. Confused and enraged, the Bouncer revs up his drill, preparing to rip and tear the cloth-and-cotton intruder.

Little Sister: I wish I had some jellies. Come on Mr. B.

Little Sister: What's that?! This one still sees the sunshine!

(Sackboy uses Pop-It to make the strings from the cursor appear, then plays jump rope with Little Sister.)

Little Sister: Look, Mr. B! Jump, jump! No one needs to get hurt, no one! Unless we miss a skip!

Little Sister: I like you ever so much! So full of stuffing! He's my new friend, Mr. B! You'll never split us in two!

(The Bouncer revs up his drill, starting to get angry.)

Little Sister: Go back to your underswampy, Mr. B!

(The Bouncer lumbers towards Sackboy, enraged.)

After chasing away Sackboy and defeating Polygon Man, the Bouncer and the Little Sister forgive each other for their behavior towards one another and return to their underwater home. Although she is a bit sad that her new friend is gone, the Little Sister tends to move on. As she sings a little song, the Bouncer glows with Polygon Man's power, intending to not allow any Splicers to touch his little girl ever again.

"There's a land called Lillipoppi. And living there is a lillipop. I'll go there soon, Mr. Bubbles, and we'll search the place from tail to top. And if we find no TattleLamby, Maybe we'll dine on Ham and Jammy, If we can't find the Lillipop. Come ON, Mr. B! Some friends stay and some friends go...some friends we never see again... But we keep going on and on, don't we, Mr. B?"

Note: All quotes are said by Andrew Ryan, presumably by radio:

Win: Facing the screen with his drill revving, all while the light emulating from his portholes are green.

Lose: Looks to the side, with hand on his head, all while the light emulating from his portholes face are red.

The default appearance of the Big Daddy, taken from the most well-known Big Daddy type.

Based on the doll seen in the AR game There's Something in the Sea and in BioShock 2. The costume is part of the preorder costume pack. 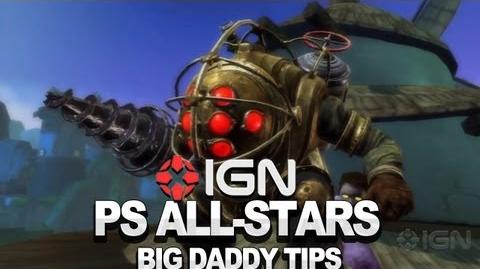 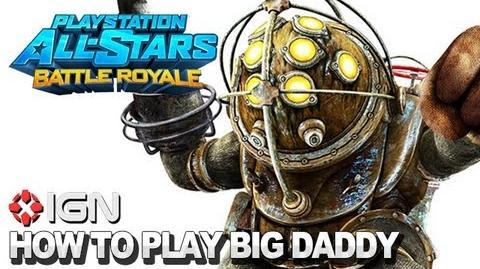 How to Use Big Daddy in PlayStation All-Stars Battle Royale 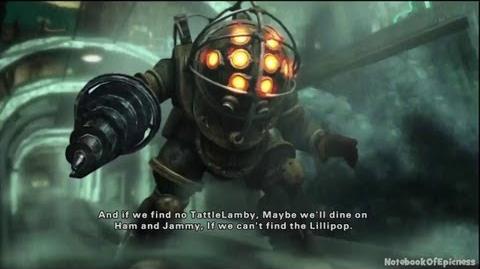 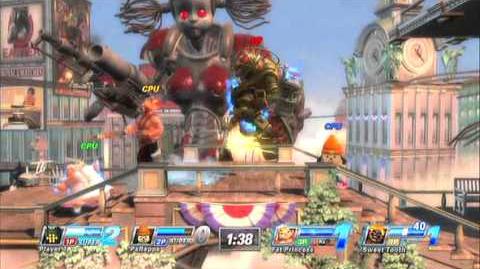 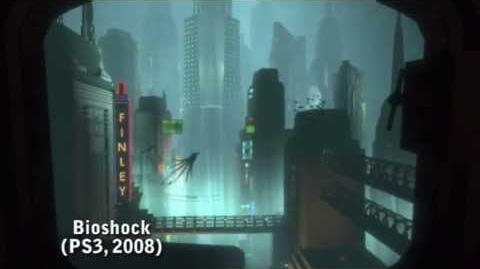