PlayStation All-Stars Wiki
Register
Don't have an account?
Sign In
Advertisement
in: Twisted Metal, Jak and Daxter, PSASBR,
and 2 more

Black Rock Stadium is a stage in PlayStation All-Stars Battle Royale that is a mash up of Twisted Metal and Jak and Daxter.

There is a trophy avaliable if Sweet Tooth uses his Level 3 Super Move, The Rise of Mecha Tooth, on this stage.

In the background, various different combatants from the Twisted Metal series can be seen driving around and attacking each other. After some time, a (rift gate) portal from Jak and Daxter opens up in the center, various Haven City Krimzon Guard Hellcat cruisers fly out and two Turbo Cannons, and the monitors in the background, which previously had Sweet Tooth, Dollface, and Mr. Grimm's faces on them, now have Baron Praxis talking about Haven City. Dark Eco also begins to flow out into the lava pits. As the fight winds down, the cruisers are destroyed by the racers and the giant monitor showing Baron Praxis is destroyed by homing missiles by the Talon helicopter.

The first phase of this stage starts with a remixed version of "Ready to Die" by Brain, Buckethead & Bryan Mantia from Twisted Metal (2012).[1]

The second phase transitions to a remixed version of "Haven City (Zoomer)" by Mark Mothersbaugh, Josh Mancell, and Larry Hopkins from Jak II.[2] 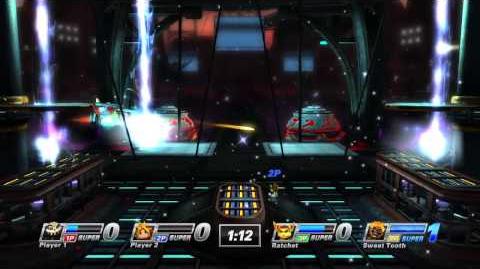 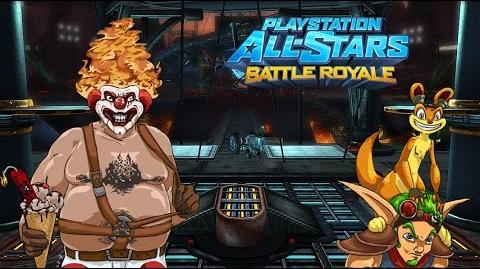