Sly Cooper and the Thievius Racconus
Inspector Carmelita Montoya Fox[1] is a major character from the Sly Cooper series. She is a non-playable hazard character and a DLC Minion in PlayStation All-Stars Battle Royale.

Carmelita Fox is Sly Cooper's love interest, who begins dating him in the end of Sly 3: Honor Among Thieves. She was a member of Interpol who constantly chased after Sly Cooper and his gang. Some time after Sly 3, Carmelita actually joined the Cooper Gang and became a member of the team.

Carmelita makes an appearance in Alden's Tower. As part of the stage mashup, she shoots rounds of her Shock Pistol at the All-Stars, thinking that they are all criminals (and noticing Sly as well), and flies around the tower thanks to a helicopter. She is also appears as a downloadable Minion that can be purchased for $0.49. However you can also buy her in a small pack of $1.99 or along with all the other minions for the price of $4.99. 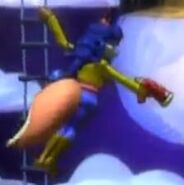 Carmelita shooting on Alden's Tower from the corner of the stage.