This article is about Cole MacGrath. You may be looking for Cole's evil counterpart.

"Let me introduce myself."

Cole MacGrath (コール・マクグラス Couru Makugurasu) is the main protagonist of the inFAMOUS series and he appears in PlayStation All-Stars Battle Royale as a playable character. Cole MacGrath's in-game rival is Raiden.

Cole MacGrath went from being a simple bike messenger to the savior of Empire City. Given powers from an exploding Ray Sphere, Cole has the ability to store, control, and unleash electricity in a variety of powerful ways. The electricity running through his body gives Cole enhanced strength, agility, durability and reflexes as well as a fast healing factor. On the path of good, Cole is a selfless hero who uses his powers to battle evil and injustice throughout the city.[1]

THE LEGACY OF COLE MACGRATH:

Cole's story begins in New Marais as Cole is attempting to protect its citizens. He claims that even with his powers, he can't protect the city alone and seeks help from others. He hears of a gathering of "special" people and decides to find out who they are. He's unsure of whether they are Conduits, but nevertheless decides to find them so that he can bring them back in hopes of gaining their help, even if it means by force.

"This whole city is falling apart. Ravaged by fear, plagued by looters and gangs... it's tearing itself apart as it seems. With all my powers, I can't hold it together myself! I need help, the kind only people like me can provide. I've heard of some sort of activity. A gathering of a special group of people. Conduits? Good? Bad? I won't know until I find them. But I know I have to find them, have to do what I can to bring them back with me to help me save this city."

Reason: While Cole is searching for Conduits to help him save New Marais, Raiden appears, pulling his sword on him, questioning his motives. Cole tells him that he is searching for "certain people". Raiden, thinking that Cole was hunting him, questions the purpose of Cole's search. Cole claims that avoiding the approaching danger was no longer an option. Raiden tells him he wants no business with it. Cole warns Raiden that he will stop him if he refuses to help, and the two prepare to fight.

(Raiden leaps down behind Cole and points his sword at him)

Cole MacGrath: Is there something I could help you with?

Raiden: What are you doing here?

Raiden: And if they don't want to be found?

Cole MacGrath: Oh, I'm afraid it's too late for that. We're all going to be involved in this sooner or later.

Raiden: Not me. Leave me out of it.

Cole MacGrath: You're either gonna help me, or I'm gonna stop you... here.

(Cole approaches Raiden, then both prepare to fight)

After defeating Polygon Man, Cole absorbs his power and returns to New Marais. He returns, unsure of if the other characters were Conduits or not, but claims that it's time that he showed off his new powers. He states that with his new power, he will attempt to save New Marais, or die trying.

"I don't know if those people were Conduits or what. It's long past the time I could worry about who's on which side. I've got work to do. It's time to end this, once and for all. Time to show everyone what I can do, and why I'm doing it. I'm gonna save this city, or die trying!"

Conduit of Good (unlocked at rank 4)

["The Final Piece" directly from inFAMOUS 2]

The default appearance of Cole, as seen in inFamous 2 when Cole's positive karma is at its maximum level.

The main antagonist and an alternate future version of Cole himself, as depicted in the first inFamous game. The costume is part of the pre-order costume pack.

Cole's outfit from Empire City as seen in InFamous. This costume is unlocked at Rank 10. 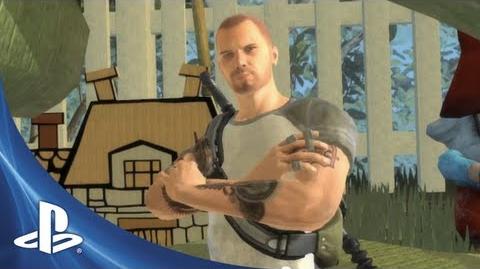 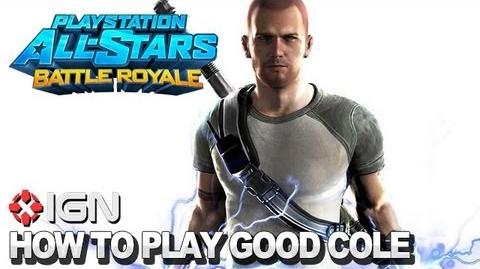 Retrieved from "https://playstationallstars.fandom.com/wiki/Cole_MacGrath?oldid=139394"
Community content is available under CC-BY-SA unless otherwise noted.