Colonel Mael Radec, or simply known as either Colonel Radec, or Radec, is a character from the Killzone series. He is the secondary antagonist of Killzone 2 and is a playable character in PlayStation All-Stars Battle Royale.[1] Radec's in-game rival is Sir Daniel.

FOR THE GLORY OF HELGHAN!

Colonel Mael Radec is a brilliant tactician who leads his troops from the front. His unwavering focus on victory at any cost has made the conquest of Helghast a formidable task for the ISA. He brings that same ruthlessness to personal combat, where he is the human personification of a shark, all of his training focused to a singular purpose: the destruction of his enemy.[2]

THE LEGACY OF COLONEL RADEC:

Colonel Radec talks about the balance of power as he oversees the battle between the ISA and Helghan Army. As the war rages on, Radec acknowledges formidable opponents beyond planet Helghan. Radec takes it upon himself to seek and eliminate all possible threats to his home planet.

"Power. All Men crave it. Some fight for it tooth and nail...never understanding the struggle to hold it only leads to it slipping through the fingers. Power always finds its way to me, and always when it is most needed. Now, for example. Helghan is under assault by the ISA, an invasion which threatens our very existence. while beyond this planet and the warships massing above it, there are rumors of even more...formidable opponents. A weak man might wait for those who oppose him to reveal themselves. Luckily enough for Helghan, I am not a weak man. No. I will find those who seek to do us harm. I will find them, and I will show them what true power looks like!"

Reason: While Radec is alone in his thoughts, Sir Daniel comes up behind him, looking for Zarok. Radec asks for his identity, but cannot understand Sir Dan's mumblings. Radec instead challenges the skeletal soldier to a duel, hoping for a more entertaining diversion.

Colonel Radec: I'm afraid my search for a worthy opponent may have been in vain. If this is the true threat to the Helghast, we have nothing to worry about.

Colonel Radec: One side. I have work to do.

Sir Daniel Fortesque: Which way to the evil Wizard?

Colonel Radec: You should have moved when you had the chance. Now, are you going to stand there mumbling, or do you know how to use that sword?

(Radec draws his Army Knife as Sir Daniel looks at his sword and shield.)

Colonel Radec: Good. Let's hope this provides more than a momentary diversion, though somehow I think it won't!

Radec considered the warriors that he faced were worthy of his talents, but none were his equal. He then notices the entire diversion did not cease the ISA's infiltration in Helghan. Thus, he devotes himself to bring order to Helghan, provide strong leadership and protection more than ever. He also assures that if anyone misjudges how much power he holds, the results could be fatal.

"The warriors I've encountered were among the most worthy of my talents. It's almost a pity none were my equal, though not unexpected. Unfortunately, this diversion has done little to stem the flow of ISA forces to Helghan. My planet needs leadership now more than ever. Strong leadership, bringing order to Helghan while protecting it from outside forces. Leadership born of respect. And respect, of course, is born of power. And if the people of Helghan and the ISA invaders think they know the power I carry, they're wrong. And being wrong in this case will cost them, dearly."

Win: Looks at the screen with arm in the air in victory.

Rise of the Helghast (unlocked at rank 45)

Radec wears the Killzone 3 jetpack over his uniform. This costume is part of the preorder costume pack.

Radec assumes the appearance of a Capture Trooper from Killzone 3. This costume is unlocked at Rank 10. 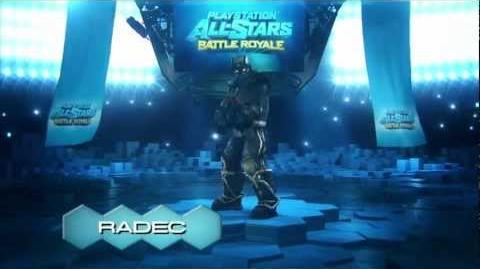 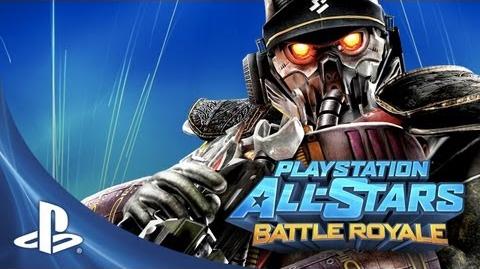 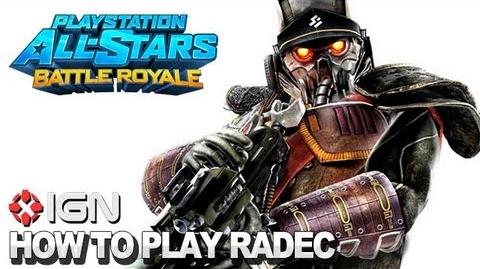 Retrieved from "https://playstationallstars.fandom.com/wiki/Colonel_Radec?oldid=138255"
Community content is available under CC-BY-SA unless otherwise noted.