Dante (ダンテ, Dante) is the main protagonist of the Devil May Cry franchise. He appears in PlayStation All-Stars Battle Royale as a playable character. Dante's in-game rival is Nariko.

Born from the union of an angel and a devil, Dante harnesses super-human powers granted by his supernatural heritage to battle supernatural forces which threaten mankind. As stylish as he is dangerous, Dante uses a plethora of weapons including his twin handguns, “Ebony and Ivory,” as well as his sword, “Rebellion,” to dispatch his foes.

THE LEGACY OF DANTE:

"This city is lousy with demons. They're everywhere, if you know what to look for. Not that I'm looking. If it were up to me, they'd stay in the underworld. But I guess no one asked me. They don't ask, they just drag me down into Limbo for a little chat. Me, I like to talk with my swords, and my guns. And I kind of feel like talking now. Doesn't matter to me what they look like or where they're from. I'm coming for the demons. And when I'm done, none of them will be left standing."

Reason: Dante thinks the demons don't stand a chance and he calls them

ugly. But suddenly, Nariko came out of nowhere, and Dante ducks, avoiding her attack. He then asks who sent Nariko. She replies that no one sent her and that she chose to come there and whom would be fought. Dante tells her it's a "bad choice" this time. Nariko says the choice was made when she picked up her sword and needs to move forward. She then points her sword at him, and then Dante pointed his at her, claiming he gave her a chance to walk away. The two then face off.

Dante: You think the demons would know better by now, they must be as dumb as they are ugly.

(Nariko comes out of nowhere)

Dante: Okay, so they're not all ugly. And who sent you, sweetheart?

Nariko: I've been sent by no one. I determine where I go, and who I fight.

Dante: Bad choice this time. I guess we're all entitled to one, though.

Nariko: The choice was made when I first picked up this weapon, since then I need only move forward, through you if need be.

Dante: Oh, it needs be, but remember, when the blade is at your throat, I gave you a chance to walk away.

"I'd say that was a piece of cake, but you don't use a sword like mine to cut cake. You know, I don't even think those were all demons. I'm not really sure what some of them were. Doesn't matter. Swords and guns don't care, and neither do I. They're gone now. I'm still here. So come on, then. Send the demons. But I'm warning you: if you thought it was tough fighting me before... it just got a whole lot tougher."

Lose: Turns his back to the camera.

Devil Made Me Do It (unlocked at rank 4)

Dante's default appearance as he is seen in DmC: Devil May Cry.

Dante's standard costume without his distinctive coat and gloves, showing his white sleeveless shirt as seen in DmC: Devil May Cry. The costume is part of the pre-order costume pack. 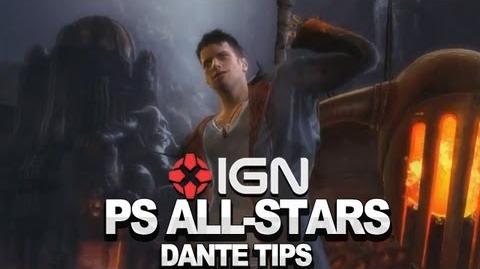 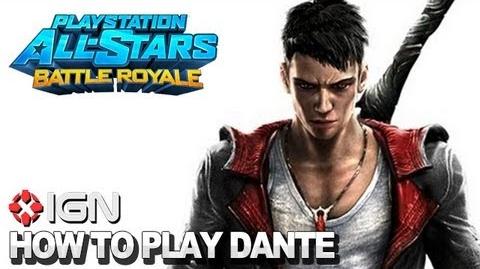 Retrieved from "https://playstationallstars.fandom.com/wiki/Dante?oldid=139425"
Community content is available under CC-BY-SA unless otherwise noted.