Dart Field is the protagonist of the game The Legend of Dragoon and could have been an additional character in PlayStation All-Stars Battle Royale, but was later scrapped.

After Shuhei Yoshida confirmed that PlayStation All-Stars Battle Royale would not be getting any more DLC (or at least any more DLC characters) SCE Santa Monica Studio scrapped the Gravity Rush/Journey Stage, and, seemingly, Dart as well.

Everything about him is unknown, although his model was revealed by one of the game's artists (seen below). 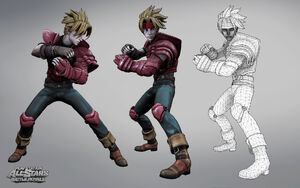 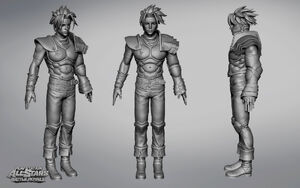 It is also unknown the reason of him getting scrapped. While many assumed Dart was going to be one of the next DLC characters and was scrapped due to the low sales of Isaac Clarke and Zeus, Seth Killian and Sony Santa Monica claim that the artwork of Dart was merely just artwork, and that they had not worked on anything else related to Dart. This could mean that Dart was at one time considered for the roster, but was perhaps dropped early on in development due to certain issues.

Dart's future as a character is currently unknown, but unlikely to be released.