PlayStation All-Stars Wiki
Register
Don't have an account?
Sign In
Advertisement
in: Stages, Parappa The Rapper, Needs Work,
and 2 more

Edit
watch 01:36
We're Getting Mutants in the MCU - The Loop
Do you like this video?
Play Sound

Dojo is a stage in PlayStation All-Stars Battle Royale. It is a mash-up of the PaRappa the Rapper series and Killzone series.

There is a trophy avaliable if PaRappa uses his Level 3 Super Move, Doom Box ft. PaRappa!!!, on this stage.

The stage starts inside Chop Chop Master Onion's dojo where Chop Chop Master Onion is teaching a lesson in martial arts. About 1 minute into a fight, a Helghast Tactician Drone will hover down the city street while a MAWLR fires on the city, as well as the dojo. Seeing the impending destruction, Master Onion kicks down the walls of his dojo and chases the Drone. Seconds before the fight ends, a giant Master Onion appears and uses a random move (either a kick or punch) or on the MAWLR, disabling it and saving the city.

The music of the first phase is an original track based on Chop Chop Master Onion's Rap from PaRappa The Rapper (1996).

The music to the second phase is a remixed version of "Helghan Forever" by Joris de Man from Killzone 2. 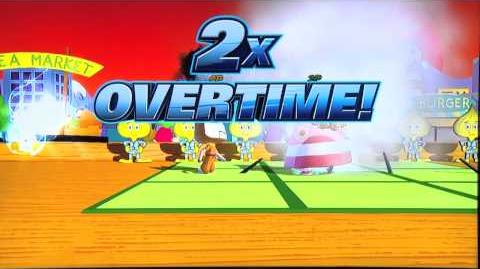