Edit
watch 01:40
The Sandman Will Keep You Awake - The Loop
Do you like this video?
Play Sound

Dreamscape is a stage in PlayStation All-Stars Battle Royale that is based on LittleBigPlanet and Buzz! [1]

There is a trophy avaliable if Sackboy uses his Level 3 Super Move, Prize Bubble Bonus, on this stage.

Dreamscape starts entirely blank, but very quickly, Create Mode selects the Garden theme, and the stage becomes that. As the battle begins, platforms are soon created, such as in LittleBigPlanet's Create Mode. More and more contraptions, stickers and items are eventually placed in the environment. A meter on the left side of the stage keeps track of how many objects can be added into the stage.

After a set amount of time, the background changes into a game of Buzz! The Buzz host may post a trivia question, and players will need to jump on the platform with the correct answer to avoid losing AP. Players who answer wrong or do not answer will have a cream pie thrown at them. After a while, the Create Mode takes back control by deleting elements of the Buzz game and placing a LBP logo sticker on the Buzz! logo.

The first phase is an original track based on The Gardens theme from LittleBigPlanet, though it could take some inspiration from the main theme of the game, "Get it Together" by The Go! Team.

The second phase is an original theme based on the soundtrack from the Buzz! series. 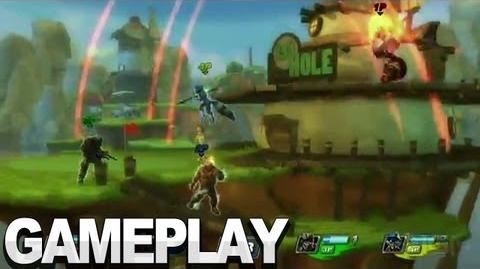