This article is about Evil Cole MacGrath. You may be looking for Evil Cole's good counterpart.

Evil Cole MacGrath is the anti-hero form of Cole MacGrath, the main protagonist of the inFAMOUS series. He appears in PlayStation All-Stars Battle Royale as a playable character. Evil Cole's in-game rival is Fat Princess. His randomly generated background is red electricity.

JUST GETTING WARMED UP!

Granted dangerous new abilities by the Ray Sphere, Cole is consumed by a thirst for more power, however it can be gained. His remorseless and single-minded path shapes his powers toward the sinister and destructive, turning him into a shell of his former self. Indeed, his increase in power comes at a cost to his opponents, as he sucks the life out of others to heal himself more quickly.

It opens in New Marais as Evil Cole claims that he is at the top, the strongest Conduit in the city. He still seeks more power and also to destroy all Conduits so that he can add their powers to his. After hearing about a gathering of "special" people, Evil Cole decides to join in the possibility of gaining new powers.

"Some say there's a war coming. Those people have already lost. This isn't the kind of war with sides. This is a race to the top. I'm already on top. And I'm only going to get stronger. To do that, I need to destroy all other Conduits, add their powers to mine. And to do that, I need to find them. Now I may have a chance. There are rumors of some sort of gathering, a collection of... special... people. Conduits? Whatever. They sound like people I should go introduce myself to. I hope they're ready."

Reason: Evil Cole runs into Fat Princess and her men and comments that they're "an interesting-looking group", then asks if he can help her with anything. After he waits for a response while she's eating her cake, she tells him to surrender his cake. Evil Cole refers to her as "your highness" and states that she should know that he isn't the type of person to surrender. Fat Princess orders her warriors to teach Evil Cole a lesson, to which he replies "How about instead of cake, I stuff my foot in your mouth!", and ignites his hand, which begins the fight.

Evil Cole: Good afternoon, ma'am. Quite an interesting-looking group. Anything I can help you with?

Evil Cole: It was a simple question.

Evil Cole: Oh your highness, I'm not sure you know who I am, but I can tell you I am not in the habit of surrendering.

(The warrior touches Evil Cole's hand with his sword, just to get electrified.)

Fat Princess: Guards, let us teach this knave a lesson!

Evil Cole: Okay, Princess! How about instead of cake, I stuff my foot in your mouth!

(Evil Cole ignites his right hand as the Fat Princess and her guards are ready to fight.)

After defeating Polygon Man, Evil Cole absorbs his power and returns to New Marais. Cole walks around talking about how Conduits are misunderstood. He claims that although power itself isn't dangerous, he is and unleashes his newfound power upon New Marais.

"One step closer. The people I fought and beat didn't understand. It's not surprising. Most people don't understand. They're scared of the powers Conduits have. Some Conduits fear their own power, refuse to unleash it. Well, I'm not scared. The power we have isn't a plague. It's not dangerous. Still, it's probably smart to be a little scared. Because while the power itself isn't dangerous... I am."

Win: Looks at screen, holding his amp as electricity flows through arms.

Conduit of Evil (unlocked at rank 4)

["The Railyard" directly from inFAMOUS 2]

The default appearance of Evil Cole, as seen in inFamous 2 when Cole's negative karma is at its maximum level.

Available as a pre-order bonus, Evil Among Thieves represents the negative karma appearance of Evil Cole from the multiplayer DLC in Uncharted 2: Among Thieves and the original inFamous game.

One of the DLC costumes in inFamous 2, this skin depicts Cole wearing a costume similar to the Reapers from Empire City. He wears a red, hooded jacket with a skull pattern on the hood, no shirt, and dark courier pants. His skin appears a significantly paler color, and he has black tar running down his torso, as well as a skull "tattoo" on his face with red eyes. It is unlocked by reaching Rank 10. 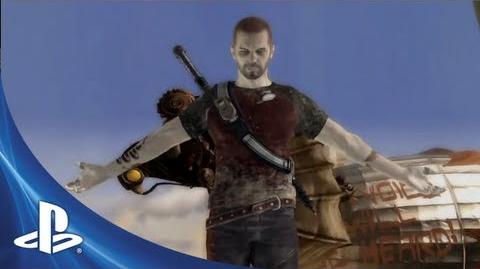 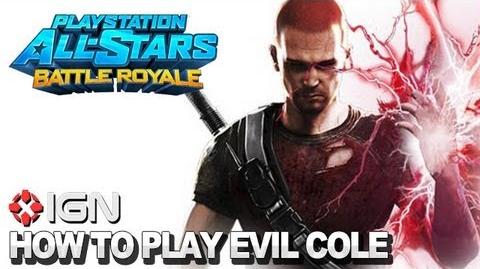 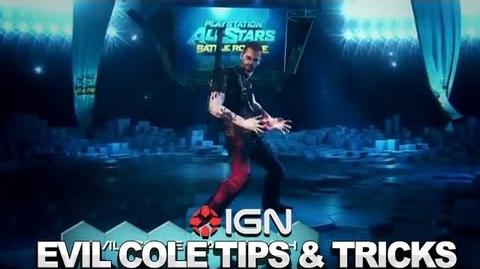 Retrieved from "https://playstationallstars.fandom.com/wiki/Evil_Cole_MacGrath?oldid=139395"
Community content is available under CC-BY-SA unless otherwise noted.