This article is about the "Fat Princess" character. For the series, see Fat Princess (series).

"Prepare to be pwned!"

Fat Princess is the main character from the Fat Princess series and appears as a playable character in PlayStation All-Stars Battle Royale. She was one of the first six characters to be revealed and the first female to be revealed. Her in-game rival is Evil Cole. Her main menu background is pink and purple glitters.

GET READY TO EAT CAKE!

Don't let her sweet, bubbly exterior fool you. When the Fat Princess puts her mind to something, look out! Whether it's tracking down every piece of cake in all the kingdoms of the land, or laying the smack down on some trash-talking rival, this royal cutie is an irresistable force of nature. The Fat Princess and her royal bodyguards first appeared in 2009 in the self-titled PS3 PSN game Fat Princess.

THE LEGACY OF FAT PRINCESS:

The story begins with Fat Princess eating cake and the narrator explains that a Royal Messanger arrives. The messanger tells of a far away land in which there is cake that the Princess has not found. So the Princess sets off. Knowing better than to get between his daughter and cake, the King sends his elite soldiers with her to guard her.

"Once upon a time, in the kingdom of Titania, there lived a beautiful princess whose love for her people was almost, but not quite, exceeded by her love for... Cake. So legendary were her cravings that all the neighboring kingdoms had learned to expect... visits from the princess and her guards in search of more. One day, a messenger brought word of a new land... one whose cake supplies had not yet been depleted by her prodigious appetite. The King knew better than to try and stop his daughter... but insisted his best soldiers accompany her and ensure her safe return. And so the Princess set out on her great adventure. She did not go looking for trouble, but when cake is involved, trouble is often not very far away."

Reason: When Fat Princess encounters Evil Cole while searching for cake, she quickly requests some from him. Evil Cole rudely responds that he was busy searching for Conduits, asking if she's seen any. Insulted, Fat Princess scolds him for his rudeness. Irritated by her attitude, Evil Cole responds with a violent threat and they begin to fight.

Evil Cole: Wow, now I have seen everything.

Fat Princess: Kind sir, do you have any cake, by chance?

Evil Cole: I'm not looking for cake, Princess. I'm looking for special people. Have you seen any?

Fat Princess: Well! There's no need to be rude about it!

(The Fat Princess' guards are huddling up, preparing to fight.)

Evil Cole: Rude? You're gonna wish for rude when I'm done with you.

Fat Princess: Bring it on... you ruffian!

(Evil Cole ignites his both hands as the Fat Princess and her guards are ready to fight.)

Fat Princess returns to the castle and everyone in the kingdom is happy to see her. Everyone wanted to know all about her adventures. The narrator explains that Fat Princess did not find any cake but what she did find (Polygon Man's AP) would spread joy to Titania for years to come. Fat Princess then looks at the screen with a sinister looking grin on her face.

"It had been, by far, the longest the Princess had been away... so the people of Titania were elated to see her approaching the castle at last. Everyone could not wait to hear of her adventures in lands so far away. Was there cake there after all? Was it sweeter than any she'd had before? Did she bring back a piece to share? Alas, she hadn't Instead, she'd brought back something that, while perhaps not as delicious as a cake, would help spread joy throughout the kingdom of Titania, from years and years to come."

Win: Happily looks to both sides with left hand behind her head and her right hand waving.

Lose: Has both hands by face, weeping.

Fistful of Frosting (unlocked at rank 45)

The default appearance of Fat Princess, based on Princess Plump of the Red Kingdom.

Based on her on the tittle screen on the fat roles DLC in Fat Princess. The costume is part of the preorder costume pack.

Fat Princess's Alternate Costume made for PSASBR. you can unlock this by turning Rank 10.

Based on a easter egg in the fat roles DLC in Fat Princess, available as downloadable content. 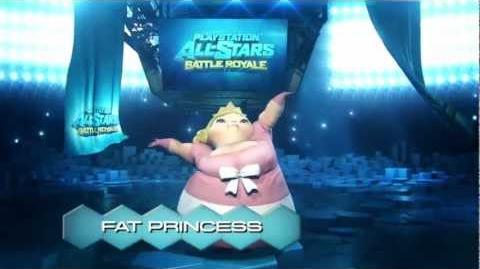 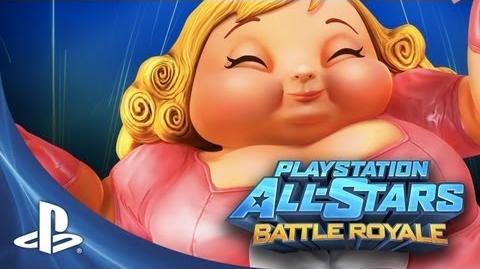 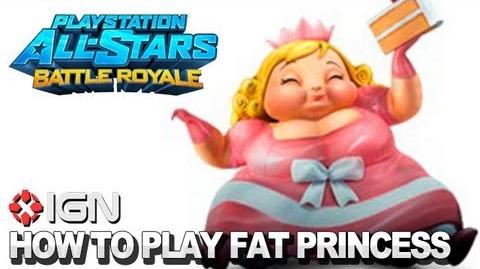