PlayStation All-Stars Wiki
Register
Don't have an account?
Sign In
Advertisement
in: Stages, PSASBR, God of War,
and 6 more

"The depths of Hades will not be trespassed by your kind, mortal. Only the gods decide who lives and dies."

Hades is a stage in PlayStation All-Stars Battle Royale that is based on God of War and Patapon.[1]

There is a trophy avaliable if Kratos uses his Level 3 Super Move, Rage of the Gods, on this stage.

The stage is set in the depths of the Greek Underworld, surrounded by walls on all four sides of the arena, with the god Hades overlooking the fighters. After a few seconds, Hades will begin to attack the fighters, bringing his claws down and sending powerful shockwaves through the arena, which dramatically alters the landscape by raising or lowering platforms.

Sometime during a battle, the stage background will switch from The Underworld to Usso Forest from the game Patapon, while retaining the original walls from the Underworld. In the background, Nyontama Yaripons attack Hades with spears. Hades will switch between attacking the Patapons and the stage itself. The Patapon spears can also prove hazardous to the player, as missed spears will go flying past Hades and onto the stage.[2] Eventually, Hades will be overcome by the Patapon's attacks and fall out of sight.

The first phase starts with a slight different version of "Duel With Hades" by Gerard Marino from God of War III.

The second phase transitions to an original track based off of the "Patapon 2 Theme" from Patapon 2. 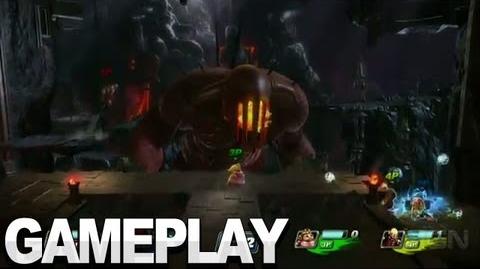 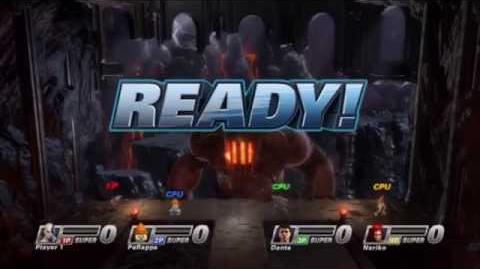