"I could beat these fools at any age."

Translation: An utter disappointment! This has been no test of my abilities at all. I could beat these fools at any age.

Heihachi is the head of the Mishima Zaibatsu and responsible for the King of Iron Fist Tournament, attended only by the strongest fighters around the world. A master of Mishima Style Fighting Karate, Heihachi seems to be able to rejuvenate himself, displaying a remarkable agility and strength which defies his true age. His pet bear, Kuma, joins him in battle, adding to the already formidable challenge he presents opponents.

THE LEGACY OF HEIHACHI MISHIMA:

Heihachi has finally perfected his youth formula. He claims that the world is his for the taking. But before he deals with his family, Heihachi wants to test his newly obtained young body. He hears of warriors unlike any he has ever met come to do battle. So he leaves Japan to challenge these new opponents to see who is the real King of the Iron Fist.

"Finally, after all those years of research. The formula has been perfected. And the results are astounding. Ah, to be young again! The whole world looks brand new and is mine for the taking. And now I have the chance to test my abilities. To push myself harder than ever before. My pathetic family and their weaknesses will have to wait. Warriors, the likes of whom I've never encountered before, stand ready to fight. But are they ready for the new Heihachi Mishima?"

Reason: After a brief monologue about his weak opponents, Heihachi is encountered by Toro and Kuro. Despite Toro's outspoken respect of the martial artist, Kuro calls Heihachi "old and feeble". Upset by Kuro's arrogance, Heihachi challenges both him and Toro to a fight.

Heihachi: An utter disappointment! This has been no test of my abilities at all. I could beat these fools at any age.

Heihachi: What now? Two cats? This whole trial has been a waste of time.

Kuro: It is! Heihachi! But he looks so... young! Where is his gray hair?

Toro: Kuro! You must have respect for an elder warrior.

Heihachi: Elder? Do I look like a feeble old man to you?

Toro: Not old at all, Heihachi-san.

Kuro: Hard to tell if you're feeble or not.

Heihachi: You should have listened to your friend. Now I'll give you a lesson in respect you won't forget!

After he has fought all of his opponents he says that they were no big deal, but feels that he can fight the whole world now.

"I've performed better than I could ever imagined. The formula has given me reflexes and strength I haven't felt since the prime of my youth. I am a young man again. The fire that burned within me now burns even stronger. All my old strength has returned. But that's not all. The formula must have changed me in other ways. I now possess a power like no other. Soon the world will witness the true power of Heihachi Mishima!"

Note: As Heihachi speaks in Japanese, the quotes listed here are close translations.

You're Not Worthy: Heihachi shouts "That can't even be a joke"! at the opponent while preparing for combat.

I'm Eating: Heihachi sits down and eats from a bowl with chopsticks, but then sounds startled and gets back up.

Glory Awaits: Heihachi faces away from the camera, looks over his shoulder, turns around, and strikes a pose.

Death Wish: Heihachi charges up with electricity, then gets into his stance while saying, "So you're in a hurry to die, huh?".

Dropping Like Flies: Heihachi walks up to the camera and shouts, "Trash!".

This is My Bear: Heihachi and Kuma both do the same moves and strike a pose.

Victorious: Heihachi stomps on the ground while swinging his fist downward.

A Worthy Triumph: Heihachi stomps the ground while his arms charge with electricity.

Annihilated: Heihachi turns to the camera and does a stance.

Bow to the Master: Heihachi sits and claps while Kuma dances for him.

If using Victorious: Sits criss-cross with arms folded, angry, and then turns his head away from the screen.

If using A Worthy Triumph: Appears exhausted, wipes sweat off of his mouth with an angry look.

If using Annihilated: Heihachi is on his knees and punches the ground in anger while charging with electricity.

If using Bow to the Master: Heihachi kicks the ground in anger.

Win: Looks at the camera in fighting stance.

Lose: Sitting down with back to the camera

To the Moon (unlocked at rank 4)

No Room for Weakness (unlocked at rank 45)

The default appearance of Heihachi as depicted in Tekken Tag Tournament 2.

Heihachi wears an expensive fur-lined jacket over an equally expensive white suit seen during cutscenes throughout Tekken 3. This costume is part of the preorder costume pack.

Unlocked at Level 10, Heihachi wears a traditional Japanese loincloth that appears in Tekken 4. Heihachi also reverts to his old man appearance from Tekken 3 to Tekken 6. 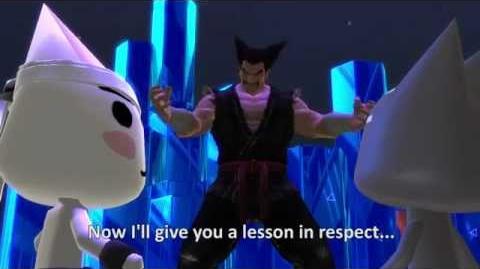 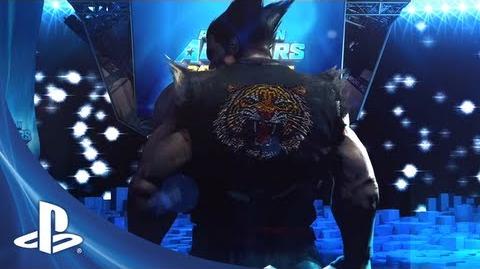 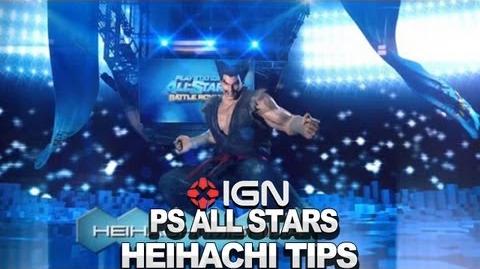 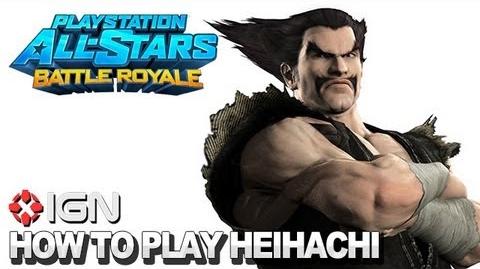 How to Use Heihachi in PlayStation All-Stars Battle Royale 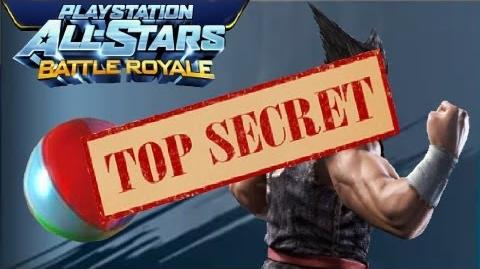 Retrieved from "https://playstationallstars.fandom.com/wiki/Heihachi_Mishima?oldid=138276"
Community content is available under CC-BY-SA unless otherwise noted.