The Jet-boar​d (also known as the JET-Board and hoverboard) is a small transportational device used by Jak in Jak II (where it was a prototype) and Jak 3. It can change in size by expanding and contracting which then allows Jak to retract it.

Jak uses his JET-board for mobility in the air and also uses it to evade certain attacks and supers from opponents. He also uses it to attack opponents in mid-air as well as on ground (while he's air-born). Additionally, this move is part of a 2-hit combo where pressing square again on contact will allow Jak to follow up with a punch that sends opponents flying. The Jetboard by itself is a very weak move with no armor or priority and low ap gain, making the combo involving it, it's best purpose for combat. The jetboard is also used in two of Jak's grabs, up-grab and down-grab. 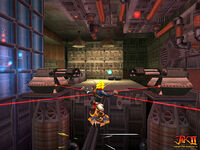 Jak seen grinding on his JET-Board in Jak II