This article is about Kat from Gravity Rush. You may be looking for the minion Kat from Devil May Cry.

Kat & Dusty are the main protagonists of Gravity Rush and are playable via DLC [1] in PlayStation All-Stars Battle Royale. Kat & Dusty's in-game rival is Emmett Graves.

TIME TO SHOW 'EM WHAT WE'VE GOT, DUSTY!

Unsure of where she comes from or how she got her fantastic ability to control gravity, Kat embarks on a quest to save the people of Hekseville from the invading Nevi. Accompanied by her feline companion, Dusty, she aids those in need while searching for answers to her mysterious origins, all the while gaining confidence in her powers.

THE LEGACY OF KAT & DUSTY

Kat: "Gade, I feel I am gaining more and more control of these powers."

Gade: "Maybe it's just the illusion of control? Or of power... And if we lose one, we gain more of the other."

Gade: "Mmm. Many things can be done with power. It can be dangerous. Maybe that depends on who is looking for it?"

Kat: "I don't care. If they're truly dangerous, someone has to stop them! Can you take me to this place?"

Gade: "I can only show you how to get there. After that, everything depends on you."

Reason: Kat mistakes Emmett as a Nevi because of his blue eyes and right arm, and attacks him, but misses and lands terribly. Kat then apologizes and says she thought he was a monster. Emmett replies that a monster is something that can't control their powers, and says Kat is an example of that, because of her landing. This leads to her saying she's experienced enough to defend her people, and he says that's just luck, and it will run out. This leads them to their fight.

Emmett: Mind telling me what the hell that was all about?

Emmett: Monsters are just people who can't control the power they got... like you, for example.

Emmett: Didn't exactly stick that landing, did you? I bet you're not even sure how you pulled that stunt off.

Kat: N- no. I'm not. But I know enough to take care of myself, and anyone who threatens innocent people!

Kat: It's not going to be today!

Kat: "I'm not sure about that. You were right about it being dangerous. The people who were there - some of them just wanted the power, or what it could get for them. Others just seemed to want to hurt people...

Gade: "And now this power belongs to you?"

Kat: "I haven't changed, Gade. I'm the same girl I was before I left. Well... maybe I've changed a little. But my heart hasn't. If anything, I'm just going to be that much better at protecting everyone!"

Hope of Heksville (unlocked at rank 4)

A Queen and Her Cat (unlocked at rank 45)

Based on one of Kat's alternate costumes from her game, available as downloadable content. 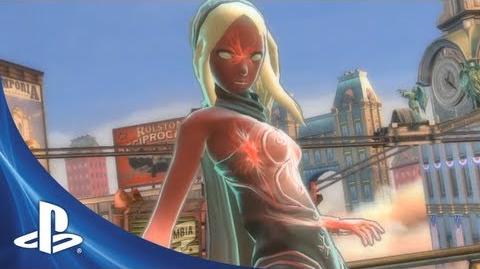