PlayStation All-Stars Wiki
Register
Don't have an account?
Sign In
Advertisement
in: Characters, PSASBR, God of War,
and 8 more

"I will see you suffer!"

Kratos is the main protagonist and anti-hero of the God of War series and is a playable character in PlayStation All-Stars Battle Royale.[1] He was one of the first six characters to be revealed. Kratos' in-game rival is Sweet Tooth.

Once the leader of the mighty Spartan army, Kratos has wrenched his fate free from the gods who used him as their servant, swearing to see their reign ended. Known for a brutal approach to combat, he will let nothing stand between him and his quest to find and destroy whomever has gathered the combatants in Battle Royale.

THE LEGACY OF KRATOS:

Kratos' story opens as he is preparing to attack Olympus. He seeks assistance from the Titans but requires a challenge to earn his place as their leader. He hears about a gathering of heroes and other warriors coming together through that power of one who considers himself a god. In order to prove himself worthy to lead the Titans, he sets off to find this gathering and take down all who stand in his way.

"This entire city, destroyed by a god driven mad by jealousy, envy of his own son. Even now, they sit on their crumbling thrones and presume to judge their former puppet. While below, the titans I have summoned await me... ready to march on Olympus and correct so many of the mistakes of the past. But if I am to lead an army as mighty as the Titans, I must prove my worth. There remain those who call themselves heroes. There is even talk of one who considers himself a god, issuing challenges to all who would answer. Heed my words, mortals: tread lightly on the earth. Beware the Ghost of Sparta!"

Reason: After running through the other characters, Kratos sees Sweet Tooth, believing him to be "another demon sent by the so-called god", and attacks him by throwing a blade at him. The blade hits an ice cream cone Sweet Tooth was holding. Angered, Sweet Tooth demands Kratos to pick up the ice cream and pay for it. Unswayed, Kratos declares that he isn't bound to the commands of mortals, brewing a fight between the two.

Kratos: Another demon sent by this so-called god. He can join the rest!

Sweet Tooth: My ice cream cone! That was a mistake, buddy.

Kratos: A mistake I can correct, if you like.

Sweet Tooth: Maybe you didn’t hear me, friend. There’s a debt here, and I’m ready to settle up.

Sweet Tooth: Pick that up. And pay for it.

Kratos: The Ghost of Sparta bends to no mortal!

After defeating the warriors and Polygon Man, Kratos returns to his world and gains leadership of the Titans. As he scales Olympus, he claims he is bringing an army the likes of which the gods have never seen and with his new power, prepares to kill them all.

"Once again, those foolish enough to stand against me have learned the folly of such actions. My destiny lies not with mortals. I must topple Olympus and all who occupy it once and for all. Titans! The son of Zeus has returned! Our hour is at hand, and we march now upon the gods. No creature sent from earth, Olympus or Hades itself can withstand our assault. And to Zeus and the cretins who kneel at his feet: I bring an army unlike any you have fought before. The Ghost of Sparta brings ruin to Olympus!"

Win: Looks at the screen with angry expression.

["Call To Arms" directly from God of War III]

["Rage of Sparta" directly from God of War III]

The default appearance of Kratos.

One of his God of War 3 DLC Armors. Unlock this by turning Rank 10.

Kratos takes on the appearance of his brother Deimos from God of War: Ghost of Sparta. This costume is part of the preorder costume pack. 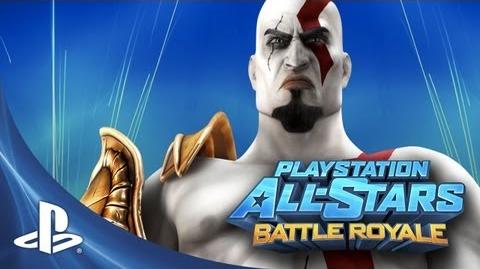 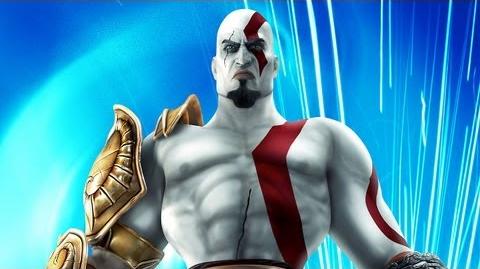 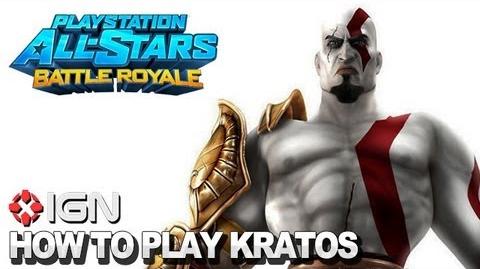 How to Use Kratos in PlayStation All-Stars Battle Royale 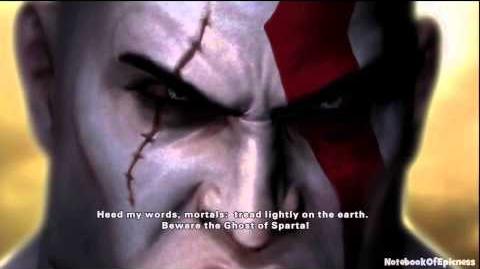 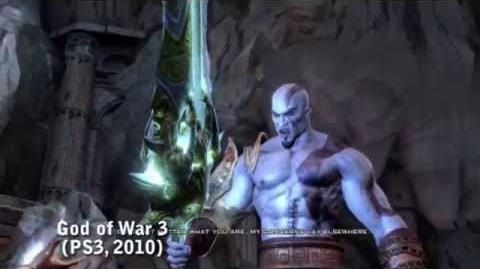