PlayStation All-Stars Wiki
Register
Don't have an account?
Sign In
Advertisement
in: Stages, PSASBR, God of War,
and 4 more

Metropolis is a stage in PlayStation All-Stars Battle Royale that is based on Ratchet & Clank and God of War.[1]

There is a trophy avaliable if Ratchet & Clank use their Level 3 Super Move, Flight of the Aphelion, on this stage.

Metropolis starts off as a classic cityscape, with conveyor belts that contain Bolt crates, TNT crates and Omega chests, moving platforms, and a grinder pit. Captain Qwark can be seen in the background posing beside a statue of himself.

After some time has passed, Qwark runs up to near the players as a heavy torrent of rainfall will fill up the bottom of the stage and the Hydra from God of War will suddenly crash through the glass walkway, knocking Qwark off stage and into the water. The Hydra will the begin to attack the fighters by smashing down with their heads and jaws, as well as occasionally eating flying vehicles in the background. Before the fight finishes, Qwark will reappear in the center as the Hydra snaps with its jaws one last time. Qwark struggles with the head and rides off stage right on the last Hydra head. 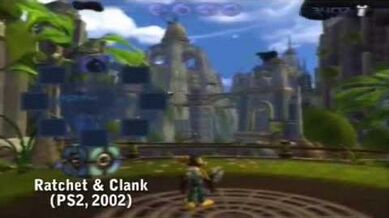 The second phase transitions to a synth remix of 'The End Begins' by Gerard K Marino from God of War II. 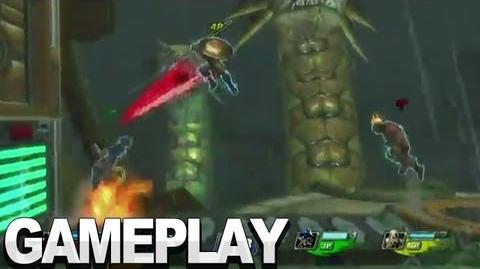