Nathan "Nate" Drake is the main protagonist of the Uncharted series, and he is also a playable character in PlayStation All-Stars Battle Royale. Nathan's in-game rival is Sly Cooper and his randomly generated background is a sandstorm.

I'M NOT IN SHAMBHALA ANYMORE...

A fortune seeker who claims to be a descendant of Sir Francis Drake, Nathan's adventures have taken him from the jungles of Borneo to the snowy peaks of Nepal in search of the hidden treasures of the ancient world. A resourceful combatant, Drake has proved adept both in the use of weapons and in hand-to-hand combat, skills which have aided him immeasurably in overcoming those who would prevent him from reaching his prize.

THE LEGACY OF NATHAN DRAKE:

Drake's story opens in a bar on an island similar to one seen in Uncharted 2: Among Thieves. He is seen talking to Victor Sullivan about pages he found that may lead to treasure (Sly's Thievious Raccoonus). Sully insists that they may just be a wild goose chase, but Drake believes that someone went through a lot of trouble encrypting the pages and that they are either after something important or protecting it. Drake finally talks Sully into flying his plane in search of the treasure.

Victor Sullivan: So, what is that, anyway?

Nathan Drake: Well I can't make out the writing. But there's something about the drawings... you know I think I recognize some of these locations. And these...these are coordinates. Someone was plotting a route to something, but...

Victor Sullivan: ...but how about a break, for a change? You know there's nothing wrong with enjoying a little quiet time.

Nathan Drake: Come on Sully, you don't go through the trouble of making a map like this unless you're after something pretty valuable. Or hiding it.

Victor Sullivan: Sounds like something we need to get a look at.

Nathan Drake: Better us than someone else, right?

Victor Sullivan: Yeah well...speaking of someone else, whoever wrote those pages is gonna want them back.

Nathan Drake: People want all kinds of things. It's getting them that's the trick. Fire up the plane, we're heading out.

Reason: As Drake begins to decipher the Thievius Raccoonus, Sly appears and explains that he is the rightful owner of the stolen pages. Drake refuses to return the pages, causing Sly to mock Drake's abilities in an attempt to intimidate him. Drake quickly responds insultingly, sparking a fight between the two treasure hunters.

Nathan Drake: Hmph. You know, either I'm going crazy... or some of this gibberish is starting to make sense to me.

(Sly drops in near Drake.)

Sly Cooper: No, you're definitely going crazy. Those... belong to yours truly.

Sly Cooper: You still don't have any idea what they are, do you? Why don't you let a real treasure hunter take care of them?

Sly Cooper: I'll tell you what. You give me those papers, and I'll save you the embarrassment of having them taken off you.

(Drake prepares to fight as Sly throws his staff up as it spun and caught it as the bladed end shimmered from its own power.)

Drake's story ends as he meets up with Sully, claiming that he's glad to see him. When Sully asks where Drake was, he describes that he faced a lot of "weird people" and that "some of them had it out for me (Drake)". Sully thinks that Drake is just making up stories and merely wants to know if he found treasure or not. Drake decides to show Sully his treasure, Polygon Man's All-Star Power, and it is absorbed into Sully's plane, greatly enhancing its performance. Sully remarks that he doesn't know what Drake found, but his plane hasn't flown that well in years, and looks forward, anxious to see where they go next. The screen fades to black and Drake randomly says, "I punched a chicken..."

Nathan Drake: Sully! Man, are you a sight for sore eyes.

Victor Sullivan: Yeah, yeah I missed you too.

Nathan Drake: I'm not kidding. You wouldn't believe some of the things I saw out there. And most of them had it in for me.

Victor Sullivan: Hey, you don't look any of the worse for wear. Couldn't have been that bad.

Nathan Drake: No, seriously. These were some real freaks.

Victor Sullivan: What it is with you and these stories, Nate. Did you get the treasure, or what?

Nathan Drake: Come on, you oughta have more faith in me, Sully. Alright, I'll show you what I found, if you think you can handle it.

Victor Sullivan: Whoa hoah! Hey, I don't know what you've been up to out there... but this old crate hasn't flown this well in years. Keep it coming, kid, let's see where it takes us!

Nathan Drake: I punched a chicken.

Win: Looks at the camera.

Lose: Body and head facing the side.

The default appearance of Drake, which is based on his Tibet Drake appearance in Uncharted 2: Among Thieves.

Nate's jacket that he wore while in Tibet during Uncharted 2. This costume is part of the preorder costume pack.

Drake's desert survival gear from Uncharted 3: Drake's Deception. This is unlocked at Rank 10. 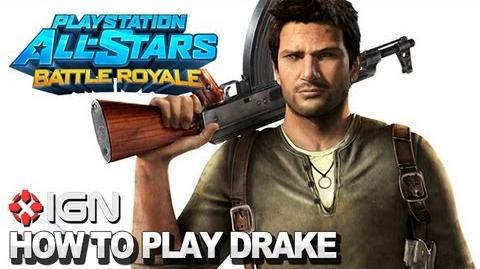 How to Use Nathan Drake in PlayStation All-Stars Battle Royale 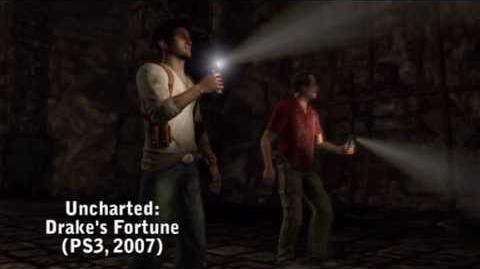 Retrieved from "https://playstationallstars.fandom.com/wiki/Nathan_Drake?oldid=138524"
Community content is available under CC-BY-SA unless otherwise noted.