Raiden (雷電), Real name Jack (ジャック Jakku) is one of the main protagonists of Metal Gear Solid 2: Sons of Liberty, a supporting character in Metal Gear Solid 4: Guns of the Patriots and the main protagonist in Metal Gear Rising: Revengeance, and appears in PlayStation All-Stars Battle Royale as a playable character. Raiden's in-game rival is Cole MacGrath and his randomly generated main menu background is electricity on his armor and his sword and an occasional lightning bolt flashing behind him.

A cyborg that is equipped with a high frequency blade that can cut any massive enemy in one fell swoop. He used to be a child soldier in the Liberian civil war. After going to America, he was turned into a cyborg by "The Patriots," an organization that secretly controls society, but then ended up killing them with "Snake", the man who mentored him. Afterwards, he began working as a body guard for a private military company.

THE LEGACY OF RAIDEN:

"My adult life has been spent helping people the best way I know how... with my sword. It's my job, now. Training those strong enough to defend themselves, and protecting those who aren't. I'm being sent on another mission. Someone is bringing a bunch of people together. No one knows why, but it doesn't sound good. Not sure they need my help, or want it. But from what I can tell, there's a force here bigger than anyone's imagined. One way or the other, I'm going to find whoever's behind this. I don't think he's going to make it easy. Fine by me - I've never liked it when things are too easy."

Reason: Cole, believing that Raiden is a Conduit, asks him if he'll join him in

the war against The Beast. Raiden turns down the alliance, believing that Cole was stalking him. Cole questions where Raiden's loyalties lie, but Raiden denies any allegiance to Cole, and strikes a battle stance in response. Cole is offended by this, verbally rebuking him before the two prepare to fight.

Cole MacGrath: You one of us?

Raiden: I'm here alone. I'm not working with anyone.

Cole MacGrath: I'm asking if you're a Conduit. Though after looking at you, I really don't need to ask.

Raiden: You sound like you're looking for someone. Is it me?

Cole MacGrath: I'm just asking if you're with me. See there's a storm coming in, and it's good to know who your friends are.

Raiden: I said I'm here alone. I'm not your friend.

Cole MacGrath: Well that's too bad. 'Cause I'm a good friend to have. But you've already picked your side, so, there's only one thing left to do.

"The target's been neutralized, and so have those who stood with him, or against me. I don't know what good I did there. I guess some people were spared having to deal with it. I'd like to think that was it, the last mission. Time to go home. But there's always someone who needs protection. Someone who can't help themselves, someone I can help. As long as they're out there, there will be no end to the fighting. Not sure that's a bad thing. After all, that's what I was built to do."

Come Out and Play: Raiden is seen crouching down with his back turned to the screen. He then stands up, faces the screen, and pulls out his Sword.

Savor Your Last Breath: Raiden holds his sword and moves it to his right, as if he was cutting something.

You'll Make My Blade Happy: Raiden slashes at the air, creating a blur.

Playtime Is Over: Raiden's codec rings and then he unsheathes his sword and slashes.

Glory Is Mine: Raiden spins his sword around with his foot, and then catches it with his hand.

Wiped Them Out: Raiden swings his sword and then sheathes it beside his hip.

I'm a Machine: Raiden strikes a pose as his codec rings and then glances toward the audience.

It's Not Even Fair: Raiden's codec rings as he sheathes his sword on his back.

Win: Stands holding his sword with both hands, looking at the camera.

Lose: Looks down with sword in one hand, occasionally with electricity flowing through him.

Raiden's sneaking suit which he wore in Metal Gear Solid 2: Sons of Liberty. The costume is part of the pre-order costume pack.

Raiden as he appears in the prologue of Metal Gear Rising: Revengeance. This costume is unlocked at Level 10. 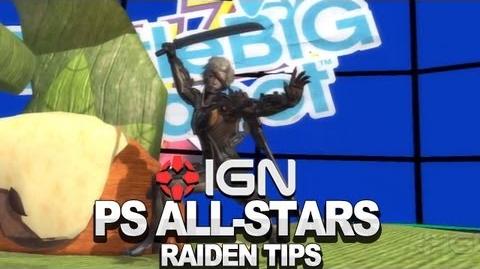 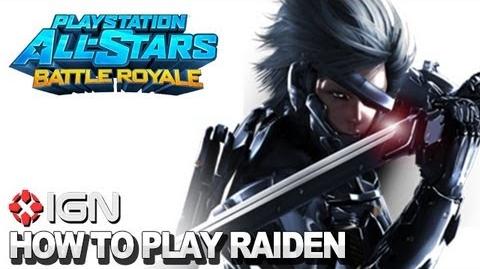 How to Use Raiden in PlayStation All-Stars Battle Royale