Armed with a seemingly endless arsenal of spectacularly bizarre and outlandish weapons and gadgets, this mechanic and his robotic companion have found themselves saving the universe from a myriad of threats, across both space and time. Their friendship forged over years of adventuring, they have learned to work extremely efficiently together, overwhelming opponents via both cunning and skill.

THE LEGACY OF RATCHET AND CLANK:

Ratchet: Come on Pal! If there were any gold bolts out here, space pirates would've picked 'em up by now. Let's go home and finish season five of Trick Out My Dropship, huh?

Clank: I will remind you that without gold bolts, there is no money for a Spaceflix subscription.

Ratchet: Good point. Where to next?

Clank: A survey of materials recovered from micro-debris along congruent vectors originating in this quadrant... indicates a high likelihood of gold bolt production.

Ratchet: Well, that sounds worth checking out.

Clank: Might I suggest we align our search along the following criteri-

Ratchet: Hang on a second. The trans-scaling reductive subinverter's picked something up. Let's head that way - I bet that's where we'll find the bolts.

Clank: We could do that instead.

Ratchet: On the way there, can you make sure our Spaceflix queue is updated? I'd hate to have to sit through another episode of Horgspleen Plus Thirteen.

Reason: Ratchet and Clank are searching for materials, Ratchet wonders that if the signal they picked up is even real or not and also claims that they haven’t seen one Gold Bolt around. However, Clank discovers Jak and Daxter nearby on his sensors, to which Ratchet states that he'd rather have found golden bolts. Jak, taking it the wrong way, asks what he meant, to which Clank tries explaining that they believed that the two were not likely to lead them to gold bolts. Before he can finish, Daxter flies into a rage, misunderstanding what Clank said and believing that he called him and Jak worthless. Daxter hands Jak his rifle to prove their worth. Clank tries to apologize, trying to negotiate a peaceful resolution. However, Ratchet was offended by Jak and Daxter's actions and accepted their challenge, beginning the fight.

Ratchet: I'm starting to wonder if that signal we picked up was real or not. Have you seen even one Gold Bolt?

Ratchet: Yeah. I'd rather have the bolts.

Jak: What was that?

Clank: My friend was merely commenting on the small likelihood of your leading us to-

Daxter: Did that tin pot just call us WORTHLESS!?

Clank: Now, now. I am sure there is a reasonable solution we can arrive at.

Ratchet: I think this is plenty reasonable. Let's settle this.

Ratchet and Clank are back traveling through space. They both comment on what they did back there and say that Qwark would've loved it. They then went back to looking for some gold bolts. Ratchet states that they are more ready to handle anything thanks to Polygon Man's power.

Ratchet: That was really something! And... different.

Ratchet: You know who would have loved that?

Ratchet: Well, probably just as well he isn't here. I think he's still a little irritated about that pair of stunderwear I snuck into his suitcase.

Clank: It would be very amusing, at least.

Ratchet: As fun as all that was, we still haven't found those gold bolts.

Clank: Shall we resume our search?

Ratchet: Sounds like a plan to me. And whatever we run up against... I get the feeling we're more ready than ever to handle it.

Bring It On, Space Face: Ratchet twirls around and catches his wrench while saying, "Get ready to be wrenched."

Thanks for the Armories: Ratchet takes out his buzz blade, touches the blade, then twitches as if he had cut himself on it.

I Detect Danger Lurking: Ratchet glides into view using the helipack with Clank saying "I detect danger lurking", then Ratchet turns around holding his wrench ready for battle.

We've Got Work to Do: Clank jumps off Ratchet's back as he turns around with the Warmonger saying, "Clank, we have work to do."

Nice: Ratchet jumps onto the stage in a similar fashion to when he exits his ship in A Crack in Time

I Do Not Come In Peace: Ratchet and Clank hover into view while Mr. Zurkon hovers in the foreground, saying "Mr. Zurkon does not come in peace."

Maybe Next Time: Ratchet puts his fist on his hips looking triumphant.

Man, That Rocked: Ratchet turns around with the Suck Cannon in a similar pose of the first game's cover art.

Yeah, We Got Him: Ratchet and Clank high-fives each other.

If using Maybe Next Time: Ratchet angrily throws his wrench into the air, which then hits him on the head.

If using Man, That Rocked: Ratchet put his hand on his head and looks down sad.

If using Ha! Nice Try: Ratchet spins around and falls over, which is reminiscent of his dying animation from the PS2 and PSP games.

If using Yeah, We Got Him: Ratchet looks down sad and swings his fist down while Mr. Zurkon looks down.

Win: Ratchet looks at the camera while holding Suck Cannon, occasionally looking behind his back at Clank.

Lose: Looks down with his hand by his eyes while Clank shakes his head.

Hero of Fastoon (unlocked at rank 4)

The Chosen One (unlocked at rank 45)

Ratchet's default appearance as he was seen in Ratchet & Clank Future: Tools of Destruction.

One of Ratchet's armors he wore in Ratchet & Clank: Going Commando. This is his pre-order costume.

Ratchet's default armor, that he wore in Ratchet & Clank Future: A Crack in Time. 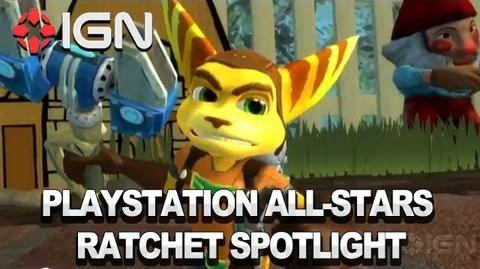 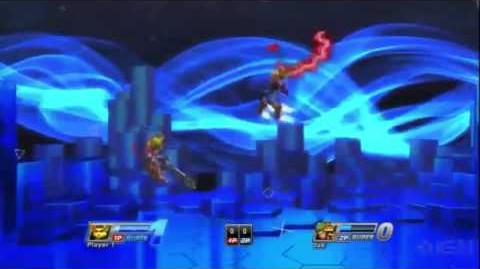 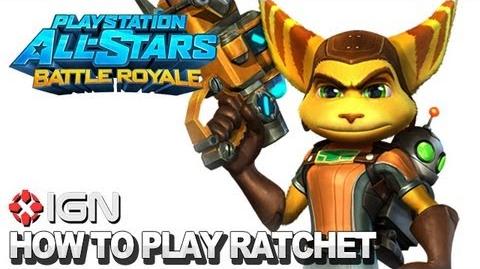 How to Use Ratchet & Clank in PlayStation All-Stars Battle Royale 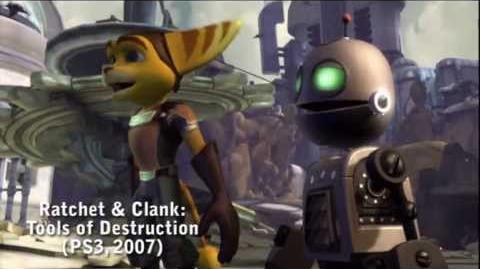 Retrieved from "https://playstationallstars.fandom.com/wiki/Ratchet_%26_Clank?oldid=139435"
Community content is available under CC-BY-SA unless otherwise noted.