PlayStation All-Stars Wiki
Register
Don't have an account?
Sign In
Advertisement
in: Stages, PSASBR, Jak and Daxter,
and 4 more

Sandover Village is a stage in PlayStation All-Stars Battle Royale that is based on the Jak and Daxter and Hot Shots Golf series.[1]

There is a trophy available if Jak uses his Level 3 Super Move, Light Jak, on this stage.

Sandover Village is a classic map (that takes place in the old world, also known as the past) with lots of platforms to jump on and water below, with a Lurker Shark patrolling.
Keira and Samos Hagai from the Jak and Daxter series can be seen in the background during the first phase of the stage. In the second phase, Keira and Samos goes through the Rift Gate by using the Rift Rider, before it shoots out multiple elements from the Hot Shots Golf series, such as a 19th Hole sign and golf carts. Suzuki, Jasmine and Nick from the Hot Shots Golf series can be seen in the background hitting golf balls, which rain down on the battlefield, draining AP from anyone who is hit by them. Their caddy, Hannah, appears near the green next to Samos's hut. Killing all opponents in a quick succession will display a "Nice Shot" shoutout with confetti showering throughout the stage.

The first phase of this stage begins with a percussion, rattle and drum beat remix of the normal "Sandover Village" variation theme music from Jak and Daxter: The Precursor Legacy.

The second phase transitions to a synth remix of "Menu 2/Credits" theme from Hot Shots Golf: Out of Bounds. 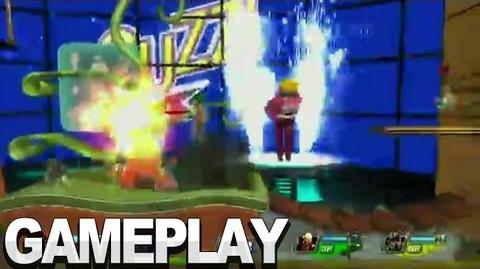