A coward whose celebration as a hero was unearned, Sir Daniel has been given a chance to redeem himself, proving in combat he is worthy of his knighthood. He fights on behalf of his beloved homeland, Gallowmere, his oath to protect her intact despite her citizens’ somewhat waning interest in gallantry.[2]

THE LEGACY OF SIR DANIEL FORTESQUE:

The story opens with a narrator telling about Sir Dan's time in the afterlife at the Hall of Heroes, taking place between MediEvil and MediEvil 2. Sensing that he is suddenly needed, Sir Daniel Fortesque returns to life from inside his crypt and goes out from Gallowmere, searching for who he believes to be minions of Zarok.

"Ah, Sir Daniel Fortesque. Having somehow defeated Zarok and banished his dark minions from Gallowmere... he has taken his...improbable...place in the Hall of Heroes. But after centuries of revelry and mirth, word has come that a new threat gathers in distant lands. Zarok, again? Could the evil wizard somehow have returned once more? No, come on. That is ridiculous. But whatever has caused these creatures to gather together, a true hero is needed to defeat them. Unfortunately, all we have at the moment is a skeletal knight of dubious courage. But bravery and folly are often confused, and so is Sir Daniel who sets forth, ready to meet the challenges ahead of him head on, if not exactly jaw on."

Reason: Sir Daniel approaches Radec, assuming that he may be a servant of Zarok. When Radec demands the knight's identity, Sir Daniel responded that he is the hero. Unconvinced, Radec dismisses Sir Daniel's claim and immediately challenges him.

Narrator: Having defeated all the villains he had encountered thus far, a result which was... well, rarely in doubt... ...the brave knight continued on his quest.

Narrator: And what's this? Another scoundrel, some abomination sent by the mysterious force, which Sir Daniel must dispatch with-...

(Radec aims his shotgun at Sir Daniel, who stops dead in his tracks.)

Narrator: Oh. Well... I'm sure we can all just see for ourselves.

Colonel Radec: Tell me who you are and why I should let you walk away.

Sir Daniel returns to his crypt, still unsure if the people he defeated during his quest were in fact Zarok's minions. Nevertheless, he saved Gallowmere and regained his well deserved place in the Hall of Heroes. As he lays down on his tomb, the narrator states that this may not be Sir Daniel Fortesque's last adventure. Polygon Man's powers also runs through him.

"Sir Daniel has once again successfully defeated those he set out to fight, a result not... wholly unexpected. The Kingdom of Gallowmere is safe once again... though was it really ever threatened? Nevertheless, Fortesque regains his well-deserved place in the Hall of Heroes. And while he hopes this will be the last time he is called back to duty... Deep in his... gallant heart, he knows this will not be his last adventure."

Note: Sir Dan lacks a lower jaw and as such, it is hard to figure out what he is trying to say.

Hero of Gallowmere (unlocked at Rank 4)

The King's Champion (unlocked at Rank 45)

Sir Daniel's default appearance from MediEvil: Resurrection, though with the gloves of his MediEvil II incarnation added.

Sir Daniel obtains and wears this armour during the final moments of MediEvil II. The costume is part of the pre-order costume pack.

Sir Daniel obtains this armour from a dragon during MediEvil. The costume is unlocked upon reaching Rank 10 with Sir Dan. 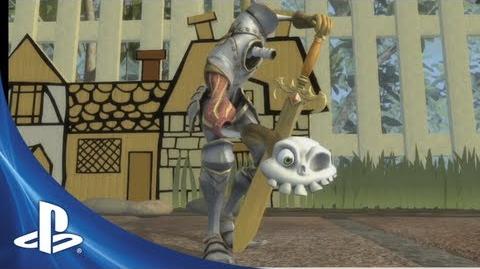 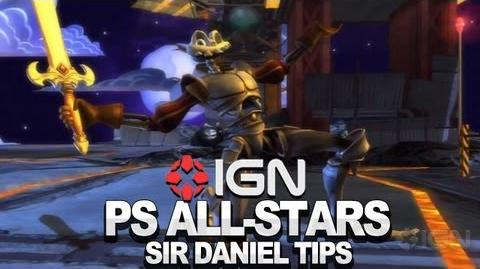 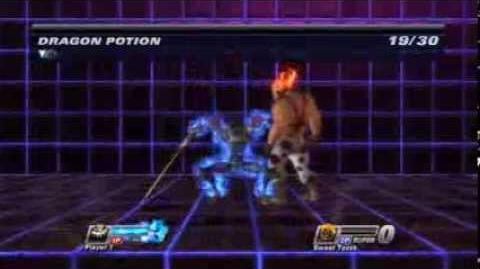 Retrieved from "https://playstationallstars.fandom.com/wiki/Sir_Daniel_Fortesque?oldid=138268"
Community content is available under CC-BY-SA unless otherwise noted.