For the series about this character, see Sly Cooper (series).

Sly Cooper and the Thievius Raccoonus

Sly Cooper is the main protagonist of the Sly Cooper franchise and is a playable character in PlayStation All-Stars Battle Royale. Sly Cooper's rival is Nathan Drake and his randomly generated background is a dark-blue backdrop with searchlights waving back and forth.


A descendant of a line of thieves which stretches back centuries, Sly continues the family tradition with grace and style. With the help of his friends Bentley and Murray, the raccoon has infiltrated even the most heavily fortified locations while making away with treasures thought impossible to steal. Favoring stealth, reconnaissance, and cunning over brute strength, Sly and the Cooper Gang always stay two steps ahead of opponents.

THE LEGACY OF SLY COOPER:

The story opens with Bentley showing Sly the Thievius Raccoonus. Shocked to learn the last pages were torn out of the book, Sly sets out to find the perpetrator and recover the lost pages.

Sly: What? The greatest thieving guide in history suddenly decided to go straight?

Bentley: Look. Here... and here! It's a clean job, there's no doubt about it, very clean, very professional. I wouldn't have caught it myself if I wasn't looking for-

Sly: Bentley! What am I looking at? I don't see anything here.

Bentley: That's just it! They're not there! At least two pages are missing, maybe more.

Sly: Missing? But it's been locked in a vault since we recovered it.

Bentley: Or so we thought! These pages were removed recently, Sly.

Sly: Have Murray put a new air freshener in the van! We're going to find those pages, and whoever took them!

Reason: Sly comes across Nathan Drake, while tracking down the lost pages of the Thievius Raccoonus. He taunts him about his carelessness in handling the pages while Drake responds by putting up his fists and daring Sly to take the pages back from him in a fight.

(Sly is looking below with his binocular while paradrops down)

Sly: Aha. There they are.

Nathan Drake: Man, I'm sure I'm getting closer. If I can just figure out this last bit.

(Sly drops in near Drake.)

Sly: Careful, careful. A real thief would know just how valuable those are.

Nathan Drake: And I suppose you know what they are, huh squirrel boy?

Sly: Sure, they're mine.

Sly: They're definitely not the property of some two-bit treasure hunter who "found" them.

Nathan Drake: Well, it shouldn't be too much trouble for you to take them off me then. Come on.

(Sly spins his cane in his palm and grabbed it as it started to glow along the golden bladed end as Drake prepares to fight.)

Sly, Bentley, and Murray talked about what they did out there. Sly got the pages back, but they've been rewritten in ancient Mesopotamian. The only translator that can translate is in Istanbul. Using the Cooper Van, the gang goes there and use Polygon Man's power to speed the van up.

Sly: What a score!

Bentley: What a lunatic risk! Do you have any idea how many times we almost bought it out there?

Sly: I know how many times we didn't! What a team! You guys were dynamite.

Murray: It's true! Our awesomeness did explode like dynamite in their fat faces!

Bentley: Looks like you picked up a few moves out there.

Sly: Oh, that's not all I picked up. Read 'em and weep, fellas. No... seriously, read them. I can't make heads or tails of them.

Bentley: They've been rewritten in ancient Mesopotamian! The only translator I know of lives in Istanbul.

Murray: Whoa! Check out this speed! I can get us there by midnight! Buckle up, Broncos, the van's running hot!

You Bore Me: Sly places his cane on the ground and yawns while leaning on it.

Chasing Shadows: Sly says, "Chasing after shadows again?" with his cane over his shoulder.

Win: Sly smiles and winks at the camera.

Lose: Sly looks down with a sad and disappointed expression.

The default appearance of Sly, based on his appearance in Sly Cooper: Thieves in Time.

Sly wears his Costume from medieval england. it was essential to the rescue of Sir Galleth Cooper, Sly's ancient ancestor. This costume is currently part of the exclusive preorder costume pack.[1]

Sly wears his thief costume from Sly Cooper: Thieves in Time. This costume unlocks at level 10.

Sly's look when he attempts to rescue his ancestor form jail, available as downloadable content. 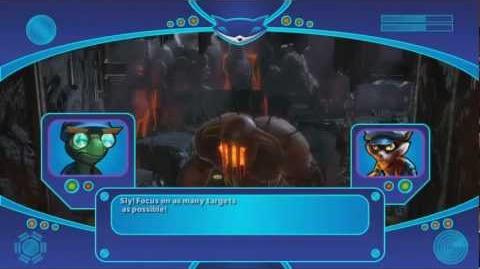 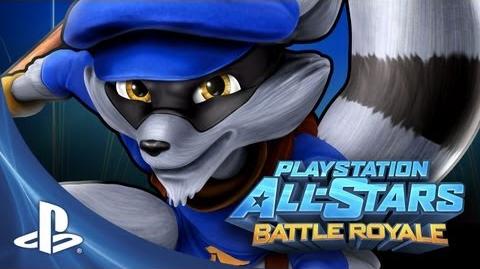 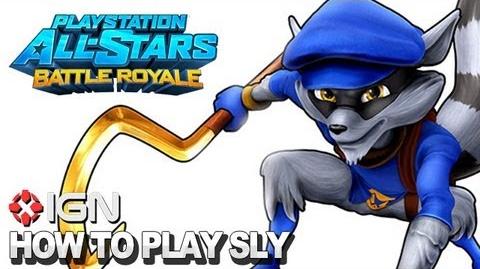 How to Use Sly Cooper in PlayStation All-Stars Battle Royale 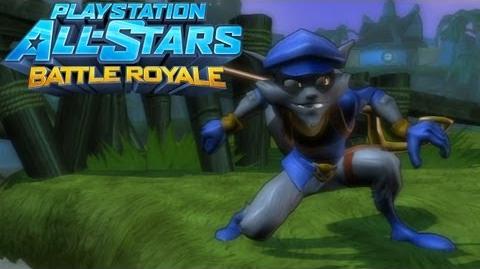 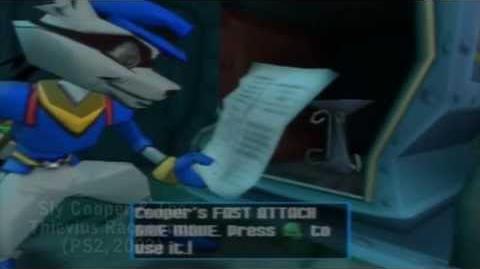