Ape Escape
Specter (スペクター) is the main antagonist from the Ape Escape series and is a non-playable hazard character in PlayStation All-Stars Battle Royale.

Specter, the primary antagonist of the Ape Escape series, was once a monkey who performed in the "Ape-Misbehavin' Magic Show" in Monkey Park, he was known for being in command of the Pipo Monkeys and the Freaky Monkey Five. He is also known for his chair-shaped hovercraft. His Monkey Helmet grants him various powers and abilities, such as teleportation, mind control and telekinesis.

Specter makes an appearance in Time Station, using the portal to summon enemies from different franchises, eventually settling with Satan. He is assumed to be piloting the Goliath Armor in Invasion as well.

He also appears as an icon that can be unlocked by reaching Rank 21 with Spike.

He is also a downloadable minion.

When summoned something that is not Satan

After the time machine is destroyed 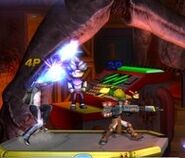 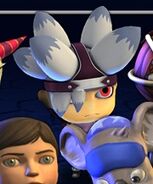 Specter as a DLC minion