Spike, known in Japan as Kakeru (カケル), is the main protagonist of the first game in the Ape Escape series and is a playable character in PlayStation All-Stars Battle Royale. Spike's in-game rival is PaRappa.

A young and energetic fourth-grader, Spike is accidentally sucked into a time machine by the hands of Specter, an ape granted uncanny intelligence through the use of an experimental cap. Spike embarks on a quest to stop Specter and his ape army, thwarting them using a variety of weapons, tools, and gadgets provided by his friend the Professor, including clubs, slingshots, an RC Satellite Laser, and Bananarang.

THE LEGACY OF SPIKE:

After returning from a monkey capturing mission for the Professor, Charu informs the two that she is picking up extraterrestrial energy. The Professor equips Spike with the Monkey Net, Stun Clubs, and other gadgets and sends him out to investigate.

Professor: Spike, you've done a remarkable job catching those monkeys. I think that may be the last of them.

Spike: Thanks, Professor. They seem to be getting smarter and smarter.

Charu: Alert! Alert! We've detected a series of events unlike any in our database. By all indications this could be an alien invasion.

Charu: There seems to be some force at work causing this. Without further data, it may be safe to assume this is the work of Specter.

Professor: There's no time to wait for more information, Spike. If this is Specter's doing, the entire planet could be threatened! You know what to do.

Professor: I'm afraid these monkey-catching weapons are all I have to give you.

Spike: That's okay, Professor. They're all I need.

Reason: As he is chasing a monkey, Spike was stopped by PaRappa, who assumed that Spike was harassing the monkey. Spike tries to explain the monkey's allegiance to Specter; however, PaRappa ignores Spike's words and assumes that the monkey is having innocent fun. Because of this, Spike misunderstands and suspects that PaRappa is allegiance with Specter. PaRappa indicates his allegiance with Chop Chop Master Onion, jokingly claiming that Chop Chop Master Onion was planning to take over the world soon. Spike, not understanding PaRappa's sarcasm, threatens PaRappa, leading into the fight.

(Spike is chasing a monkey, then PaRappa appears and stops him.)

Spike: What are you doing? I almost had him!

Parappa: Lay off him, Spike. He's just a little monkey.

Spike: Those little monkeys are trying to take over the planet!

Spike: I like saving the world. And what about you? Are you working with Specter?

Parappa: Specter? Who's that? I'm working with Chop Chop Master Onion. I don't think he's trying to take over the world, yet...

Spike: Well, I'm not going to wait around to find out!

Spike returns to the lab safely, relieving the Professor. The Professor then shows Spike that alien warships are invading major capitals around the world, all of which being led by Specter. Spike assures the Professor that he'll take care of the aliens, monkeys, and whatever gets thrown at him using the power he recieved after defeating the Polygon Man.

Spike returns to the lab to see the professor. He proudly tells about his adventure, when the professor interrupts him, warning Spike that Specter and his monkeys are attacking the capital. Glowing with energy, Spike steps forward to save the day.

Professor: Spike! You're back! I'd begun to worry we'd never see you again.

Spike: It's good to be back, Professor. You won't believe the things I saw.

Professor: I'm sure I won't, Spike. We've got some news here-

Spike: I do, too. I fought everyone up to the big guy controlling them all. But it wasn't-

Professor: Specter, I know. Charu and I still aren't sure where you were, but we've since detected a true alien invasion. Warships are heading toward all the major capitals of the world.

Spike: So Specter really is back! Well, I'm more prepared for him and his aliens, monkeys... or whatever else he's got than I've ever been before. Where to first, Professor?

Neener Neener: Spike does a "neener neener" gesture with his hands and says, "I'm still better than you."

You Make Me Sleepy: Spike stretches out his arms and yawns.

Win: Stands with a happy face, with his left eyebrow raised up, and his arms to his sides in a triumpant pose.

Lose: Looks down with a sad face, and occassionally sniffling.

Spike's default costume, based on his design from Ape Escape: Million Monkeys.

Spike's battle gear from both Ape Escape: Million Monkeys and the Ape Escape anime "Saru Get You ~On Air~". The costume is part of the preorder costume pack. 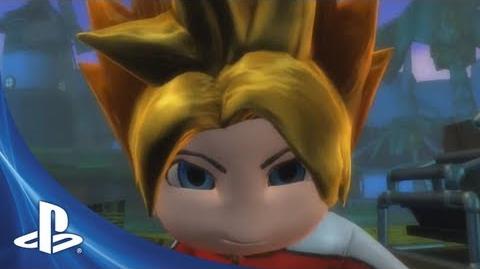 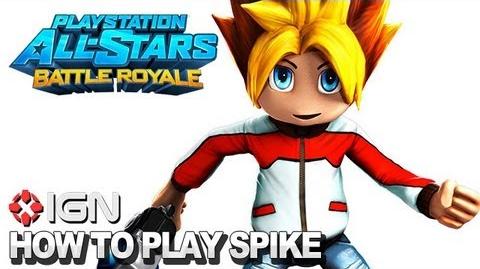 How to Use Spike in PlayStation All-Stars Battle Royale 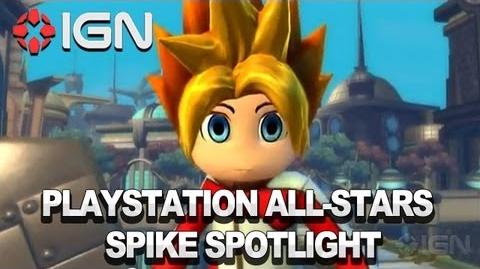