Sweet Tooth (Real name: Marcus "Needles" Kane) is the unofficial mascot of the Twisted Metal franchise and is a playable character in PlayStation All-Stars Battle Royale.[1] He was one of the first six characters to be revealed. His in-game rival is Kratos.

TIME FOR SOME FUN.

Marcus Kane had it all - big house, beautiful family, great job serving ice cream to the neighborhood kids. Then something went wrong. Very wrong. When he donned the mask and became Sweet Tooth, there was no going back. Now he carves a path of destruction and desolation, whether in his legendary ice cream truck or on foot. Violence is what he craves, wherever it can be found, and whomever it can be inflicted upon.[2]

THE LEGACY OF MARCUS "NEEDLES" KANE:

"I love this old heap. She's always there for me. Seems almost as eager as I am to show her stuff, show everyone what a great team we are. Besides all that, she still makes the best ice cream around. Not a lot of people know that. Guess most people never bother to ask. But I'm not just the ice cream man anymore. And if Calypso or anyone else wonders what I can do on my own, I'm gonna answer them now. I'm going to show everyone what happens when Sweet Tooth gets out of the truck!"

Reason: Sweet Tooth is admiring his ice cream cone, but suddenly Kratos throws one of his blades at him, knocking the scoop to the ground, which Sweet Tooth even admits was a neat trick and wondering if he can match it. Kratos then calls him a cretin and orders Sweet Tooth to stand aside or be killed. Sweet Tooth taunts Kratos, then tells him that he will pay for the ice cream cone one way or another while pulling out and revving up his chainsaw, beginning the fight.

Sweet Tooth: Such sweet, cool perfection. A round ball of heaven balanced on a delicate cone... so pleasing to the senses. Who doesn't love an ice cream cone?

Sweet Tooth: Pretty neat trick there, pal. Let's see if I can match it.

(Sweet Tooth draws his machete while Kratos brings back his blade.)

Kratos: Another cretin sent by a so-called god. Leave, or join those who have come before you.

Sweet Tooth: Well, get a load of you, cupcake. You know, I worked real hard on that ice cream cone. REAL hard. Dunno if you got any money in that skirt of yours... But one way or the other, you're paying for it.

(Sweet Tooth drops his machete, then pulls out and revs his chainsaw.)

Sweet Tooth returns to his ice cream truck after beating everyone, saying that he missed his truck. He revs up the engine, the truck now super-powered by the energy from Polygon Man, ready to win the next Twisted Metal competition and show Calypso his new upgrades. He then drives away with an evil laughter.

"All these stories seem to go the same way: me against the world, and me the winner. They all learn sooner or later they got more than they bargained for. Did some real damage back there. Still, can't say I didn't miss my old truck. Yeah. There she is, faithful as ever. She was already the best thing on wheels before any of this... But wait'll Calypso gets a load of my new upgrades! Oh, man! He's never gonna know what hit him!! Sweet Tooth is back, baby, bigger than ever!"

Hello Boys and Girls: Does a "Peek-a-Boo" face and menacingly says: "Hello, boys and girls!"

I Dance on Your Remains: Sweet Tooth giggles and dances around while saying "Oh Yeah!".

Get Ready for Pain: Sweet Tooth slides his hand over his neck while saying, "Get ready for pain."

Prepare for Pain: Sweet Tooth stands up from a crouched position and roars.

Who Wants Ice Cream?: He walks on-stage slowly as if stalking somebody while saying, "This is gonna be fun!".

All Revved Up: Sweet Tooth turns around and revs up his chainsaw.

Taste the Tooth: Rubs his hands together, giggling sinisterly to himself

Body Clean Up: Sweet Tooth rubs his hands together.

Contest Over: Sweet Tooth places his hand over his mouth and steps back in with an, "Oh my..." expression.

If using Taste the tooth: He puts his hands over his head and groans angrily.

If using Muahahahaha: He sits with his back to the screen.

If using Body clean up: He stands up in defeat.

if using Contest Over: He kneels down angrily with his machete.

Win: Looks at the camera.

Lose: Has both hands on his head, possibly in pain.

Gimme the Trophy (unlocked at rank 4)

The default appearance of Sweet Tooth. 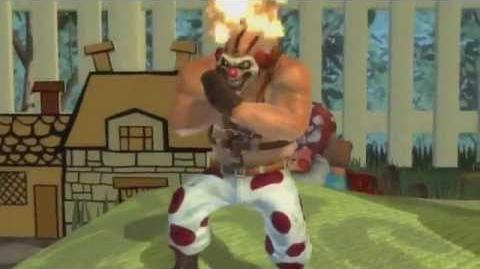 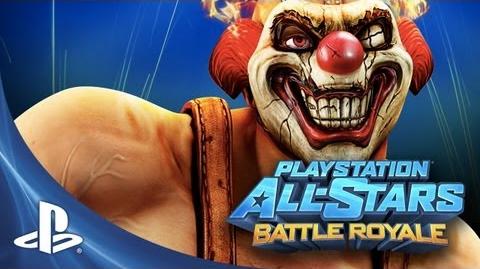 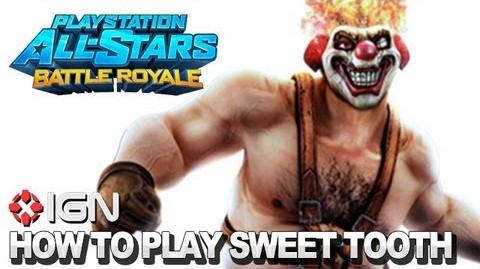 How to Use Sweet Tooth in PlayStation All-Stars Battle Royale