The Graveyard is a DLC stage in PlayStation All-Stars Battle Royale based on MediEvil and The Unfinished Swan.[1]

A Gargoyle statue from MediEvil: Resurrection appears near the foreground and will taunt and wisecrack at the players, producing a unique line of dialogue for some characters in the game.

The first phase of the stage's soundtrack is an original track based on "Lost Magic" by Andrew Barabas and Paul Arnold.

The Graveyard - The Unfinished Swan[]

The second phase transitions to a remix of "The Monument Falls" theme plays during the second transition of the stage which originates from The Unfinished Swan.

Zeus in The Graveyard.

The stage completely in The Unfinished Swan style. 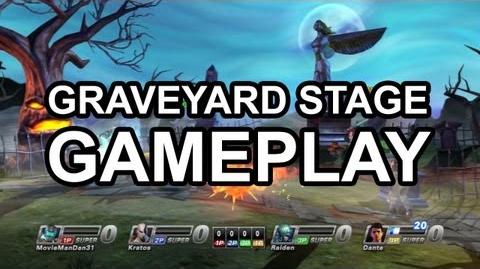