Toro Inoue (井上トロ), also known as the Sony Cat in English, is the official mascot for PlayStation in Japan, and a playable character in PlayStation All-Stars Battle Royale.[1] Toro's in-game rival is Heihachi Mishima.

Adopted by a kindly sushi store owner, this once-abandoned cat is on a quest to become more human. Toro has the ability to assume any of a variety of roles instantly, adapting as the situation requires. An unabashed fan of games, Toro is thrilled to finally meet so many of his heroes.[2]

THE LEGACY OF TORO INOUE:

One day, Kuro informs Toro that there is going to be a fighting tournament. Seeking to become more human, Toro agrees to enter the tournament.

Kuro: There is a gathering of mighty warriors happening!

Kuro: It's close! And everyone will be there!

Kuro: Yes! All of our favorites!

Toro: Perhaps I can go there to meet them! If I can learn to fight like them, I might become human.

Kuro: And maybe there will be some pretty ladies there!

Toro: Kuro! We must be respectful around such legendary humans! And we should also not be late! Let's go!

Reason: Toro and Kuro encounter Heihachi while he is busy training. Heihachi tells them to leave, but Toro and Kuro are eager to catch up with Heihachi, even asking why he looks young. Heihachi, angered by the cats' persistence and seeing that telling them to leave did nothing, refuses to answer and "makes himself clear" by challenging both of them to a fight.

Kuro: If these humans only want to fight you, we should at least bet on the outcome!

Toro: I'm here to meet these people so I can learn to be like - look!

Kuro: Ah! Heihachi! I had a feeling he was around here somewhere.

Toro: It is Heihachi, but... he looks different.

Heihachi: Move along, kitties. This is no place for you.

Toro: Heihachi! Is it really you?

Toro: We just want to ask you some questions, Heihachi-san.

Kuro: Why are you so young?

Heihachi: These matters don't concern you. I already told you once to leave, but it seems I haven't made myself clear!

(Both Toro and Heihachi are showing off some moves before the fight starts.)

Kuro and Toro found the "tournament" as an exciting experience where they've got to meet many new people (the other All-Stars), however, Kuro sees in Toro's face that he became sad when he got home. After asking Toro what's the matter, he answered: "Even after all of that, I'm still not a human" to which Kuro responds by telling him all the humans wanted to do was fight, and he needed a better way to become human. After a short laugh, they talk about Toro's new power from Polygon Man, which, as described by Toro, "suits me very well, don't you think?"

Kuro: That was a great adventure!

Toro: Yes. It was very exciting, and we got to meet so many new people.

Kuro: So what's the matter?

Toro: Even after all of that, I'm still not a human.

Kuro: All those humans wanted to do is fight you! You'll have to find a better way to become a human, Toro.

Toro: I guess you're right, Kuro. I will just keep learning new words.

Kuro: That's the spirit, Toro. And besides, even if you're not human... look how much you've learned!

Don't Make Me Giggle: Toro moves his paw from his chin to his side while shaking his head.

Too Love-able to Lose: Toro puts his paws up to his face and meows.

(Toro can only make cat sounds.)

Winning: Waves his arms for joy.

Losing: Crosses his arms, either with a sad or angry expression.

There Will Be Mochi (Unlocked at rank 4)

The default appearance of Toro. He starts off wearing a headband, a black belt, and wristbands as Justice Toro, goes into a ninja jumpsuit as Torobi the Kat, and wears an afro with yellow horns and a caveman skirt as Oni Toro.

Toro wears restaurant-themed clothing in each of his forms. This costume is part of the preorder costume pack. He starts off dressed as a waiter as Justice Toro, turns into a dishwasher as Torobi the Kat, and becomes a chef as Oni Toro.

Unlocked at Level 10, Toro wears clothes modeled after musicians. He starts off wearing visors, Hawaiian shirt, and shorts as Justice Toro, turns into a punk rocker as Torobi the Kat, and has an afro and an Elvis suit as Oni Toro. 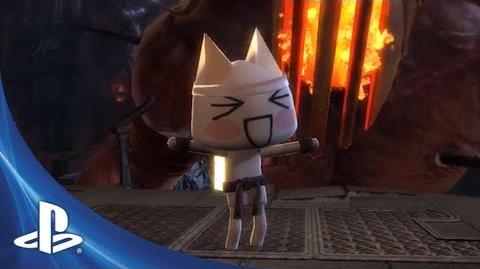 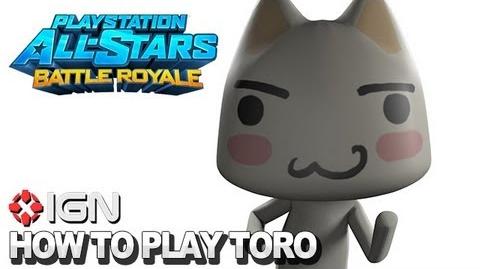 How to Use Toro in PlayStation All-Stars Battle Royale 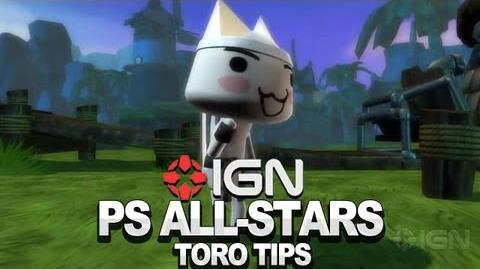 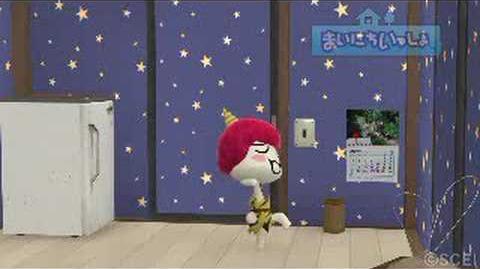 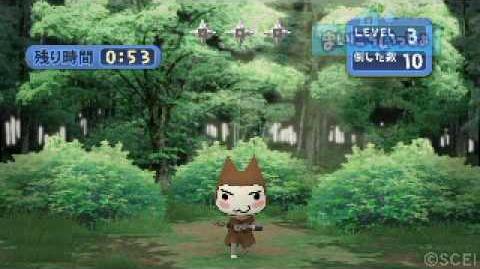